We are all significant Beyond the headlines and glowing tributes, even ordinary people can leave powerful legacies behind for lives well lived. One in 10 pay last respects.

WHEN Tunku Abdul Rahman passed away on Dec 6, 1990, and was lying in state the following day at Parliament House, I was there to pay my respects.

There was just a one-hour window for the public before the funeral procession from Parliament House to the Selangor Padang, now called Dataran Merdeka.

It was a short distance but it took more than half an hour for the cortege to reach Selangor Padang, where it was taken by car to the Sungai Besi RMAF base to be flown on a plane to Alor Setar, where the Tunku was buried at the Langgar Royal Mausoleum.

The Tunku was a man I greatly admired. Having paid my respects and mourned alongside Malay­sians from all walks of life, I wrote an obituary piece which subsequently came out in Malaysian Business (Dec 16-31 1990) titled “Farewell Bapa – the Tunku’s final journey through the streets of Kuala Lumpur”.

Those were the days when there was no Internet, mobile phones, Twitter or Whatsapp to chronicle proceedings as they happened in real time.

As I reread my article, I realised how important it was to be as descriptive as possible about what happened that day.

I was reflecting on this funeral as we remain captivated this past week over the death of Lee Kuan Yew. In many ways, the lives of these two men were interlinked, but the destinies they forged and the legacies they left behind were different.

Most of us are not public personalities. Our deaths will not even be on the public records, save for the obituary advertisements if we care to publish them.

But I believe we could leave as huge an impact on the lives we touch.

As I read many of the published commentaries about Lee and his legacy, I cannot help but feel that it was not just the man, but the legend surrounding him that was being commented upon.

Some of the writers probably did not even have a direct encounter with him and were writing based on what has been said about him by others.

For ordinary people, there will not be glowing eulogies or insightful obituaries, but a life well lived will always leave behind a strong legacy.

A fortnight ago, a dear friend and fellow cancer survivor passed away. She was an amazing woman who touched many lives. I can never forget what another friend told me about her.

The friend who passed on was a Christian. My other friend is a Muslim. We both now have one friend less to pray for in our journeys together.

All of us will leave this world one day, whether we are famous, infamous or simply ordinary folk.

Somehow, the death of an important person makes us want to say something about him, even if he had never been a part of our lives.

But I think it is more meaningful to reflect regularly on the ordinary people in our lives, especially while they are still very much alive.

For if we do so, the tears that flow on the day they die will be real because we are part of the legacy they leave behind.

Executive editor Soo Ewe Jin is thankful for every person who has touched his life, in big ways and small. The views expressed are entirely the writer’s own.

One in 10 pay last respects 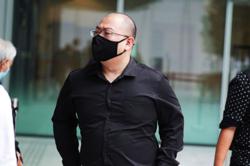