The various races of Malaysia are united in the belief that we’re the only victims.

A FEW years ago, one of my neighbours - your average, educated, urban middle-aged Malay woman - lamented that her then 10-year-old son had no non-Malay friends.

She came from a traditional Klang Valley family, and her circle of close lady friends consisted of just about every race and they could trace their relationships back to their school days.

So she asked her son what happened to the Chinese friend he used to hang out with, and he said his Malay friends had “warned” him that the other fellow ate pork, so that was that.

I had to tell her that when I asked my eldest daughter why she had drifted apart from her best friend of only last year, she had told me, “Oh, she only has Indian friends now, and apparently I am not Indian enough.”

My neighbour shook her head and asked, “Where did we go wrong? Why are our children more racist than us?”

Last year, however, when she saw me, she went on a rant about how “our weak leaders were giving in to the arrogant demands of the non-Malays”. She spoke with a deep, abiding anger, an anger that seemed to have been nursed for a long time but that would have, paradoxically, surprised the “her” of only two years ago.

Yes, here I am, going on about race again. “Harping on about the same issue” or “flogging a dead horse” - choose any descriptive phrase you want to dismiss my ramblings, but it’s true that race relations have now become just as critical an issue as the economy and the on-going political shenanigans. 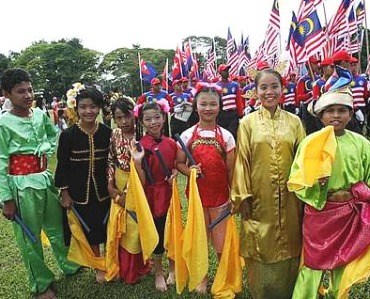 Will muhibbah photo ops only happen during Merdeka day celebrations when our children gather self-consciously to pay lip service to the idea of unity? – File photo

From street protests in Penang just after the 12th general election in March, to busting up forums seeking to resolve legal issues only incidentally involving religion, it’s obvious that a large number of Malays are worried.

Their fears are being stoked by unscrupulous politicians wearing their bigotry not merely on their sleeves but as badges of honour, and certain media organisations with their selective reporting (interestingly enough, not among the three newspapers recently issued show-cause letters by the Home Ministry).

Oh, and the Chinese feel unappreciated and the Indians feel marginalised, while the “Others”, or “Dan Lain-lain”, don’t even have a voice to express their unhappiness.

We all feel victimised. We feel that if we raise the issue, we’ll be hauled up by the authorities while frothing politicians get away with threats of implied violence and repatriation. And in reaction to all this, we sometimes fall back on our own prejudices €“ just read some blogs and comments where racist rants are given uncensored expression and you’ll know what I mean.

We write these off at our own peril. We can’t just brand them the way I did, with loaded phrases such as “unscrupulous politicians,” “stoking fears”, and so on, because it’s obvious that something very real, worrying, and puzzling is happening here: Unbelievably, every single community in Malaysia feels set upon. We’re all of us feeling the heat of bigotry, we all feel as if we’re being singled out for punishment, we all feel neglected.

Just how did we reach such a stage? We can’t blame it all on opportunistic politicians or the media either. There have been indications over the past few years, but we ignored them - or to be more accurate, we expressed some concern but didn’t hold the government of the day to any accountable action.

We’re all of us responsible for this state of affairs. We non-Malays have a habit of writing off the concerns of the Malays as racist screeds that deserve a like response. We ignore the fact that there are still economic disparities and a large swathe of the Malay community is still lagging behind, and we write off these concerns as the Malays just being ungrateful.

It should be obvious to even the most insensitive of us that many Malays are genuinely hurting, yet we haven’t reached out to them to ask “why.” After decades of affirmative action, there are still disparities, and we’re not looking for the reasons. Instead, we apply the same policies with greater force, rather than using our energies to come out with new solutions.

Many Malays, on the other hand, have yet to acknowledge the fact that there are sections of other communities that are suffering as well. Furthermore, because some members of the other races are not above using their own racial pride as weapons in their bigoted view of the world, the Malays react with passion, leading them to shore up their defence mechanisms, which in turn leads to an even further breakdown in race relations.

The line between racial pride and racist prejudice is insidiously thin. In appreciating the abilities of one race, we’re in danger of denigrating those of another.

It’s a vicious cycle. Racism is a self-replicating infection that threatens the health of this nation, and we haven’t even bothered to begin treating the symptoms, let alone seek a cure. All we’ve ever done is apply placebos and move on.

Enough. We need to stop right now and look at this intelligently and without bias - “we” being both the people and the politicians we’ve invested with the authority to address these issues.

The Cabinet has approved the proposed Race Relations Act (The Star Online, Sept 18). The Unity, Culture, Arts and Heritage, and Home Ministries are collecting data and will be studying similar legislation in other countries in drafting the Act, which will include not just provisions on punitive action, but also focus on building and strengthening race relations through the economic and education systems.

Our schools should perhaps start teaching how all the races of Malaysia have contributed to the nation. Students should be encouraged to learn other languages as electives, from primary school onwards. We should weed out racist teachers, while the rest should be trained to be role models of unity and integration.

We need to ask why after 51 years of self-rule and increasing inter-racial marriages there are still large sections of Malaysians who only hang out with members of their own race.

We need to stop advertisements that acknowledge the existence of only one race in Malaysia.

We need to do away with recruitment ads asking for applicants of a certain race only, which has no basis in our affirmative-action policies, or ads on rooms for rent that specify race.

Parents need to shed their own prejudices when their children marry someone of another race.

We need to stop reacting to racism with our own bigotry. We must be willing to risk being labelled “traitors” to our own race for the sake of the nation we all belong to. We need to walk a mile in each other’s flip-flops.

Most of all, we need to stop ignoring each other’s pain.

A. Asohan, New Media Editor at The Star, is glad that his daughters are so racially ambiguous that their friends come from every creed and colour.