AMONG the elites, having a membership with a prestigious club signifies one's superiority in terms of his or her social status. Interestingly, a similar club exists for foreign currencies.

Out of the 180 currencies recognised by the United Nations member states as legal tender, only a handful have made it to the Special Drawing Rights (SDR) club of elite currencies. The SDR, introduced in 1969 by the International Monetary Fund (IMF), serves as an international reserve asset to provide liquidity to the global economy which central banks worldwide could use like an overdraft account as and when the need arises. 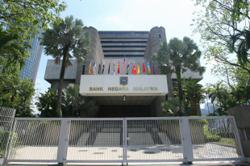 The day a future King of Malaysia came to our rescue
Questions of leadership
Hope in humanity’s goodness
Haaland in wonderland, Almiron sizzles as EPL returns with a bang
Is sustainable HR management humanistic?
Approaches to law reform
Pink attitude for male breast cancer
Telling herstory
When fake goes mainstream
Check before you forward!