NATIONS grow great through harmony and fall into oblivion through discord.

For several decades after independence, Malaya (later, Malaysia) was seen by the world as a nation in which peace and prosperity, democracy and development could go hand in hand in the midst of dazzling diversity.

Sadly, we have regressed. Since the 1990s, religious, racial and regional extremism have become mainstream.

Syariah and civil court disputes, unilateral conversions, the Kalimah Allah controversy, infrequent but explosive cases of apostasy, the khat issue, the Islamic state debate and the push for hudud laws are all polarising society.

Not only inter communal disputes, but also intra communal discord, have become prominent. The tirade against “liberals, secularists, and deviants” is quite vociferous. Though not officially acknowledged, class divisions are emerging, and the elitist orientation of institutions, laws and enforcement processes is drawing serious concern. Endemic corruption is permitting the resources of the nation to be diverted to powerful elites.

Sabah and Sarawak’s discontents are boiling over.

It must be noted, however, that the magnitude of the disunity problem is exaggerated. A clash of conflicting interests is inevitable in any society. Federal systems are everywhere prone to federal-state disputes. The Internet, social media and the hyper-information society promote online snarling and aggravate societal divisions and discord.

Though we have problems galore, we remain a dazzlingly diverse society in our religions, languages, cultures, dances, music, dresses and food. Mosques, temples and churches dot our landscape. Non-Muslim communities are allowed to run casinos, breweries and pig farms.

At the political level, power was, at least till 2020, shared among all the communities. The economy is used to unite the people. A vigorous private sector works hand in hand with the public sector in the economic arena.

Every day, in so many ways, there are acts of friendship and transcendence in our schools, clubs, shops, workplaces, neighbourhoods and sports arenas by people of one faith towards people of another. Ordinary citizens understand the value of harmony, peace and stability. Most of us judge each other by our character and conduct and not by the colour of our skin or our race or religion. What divides us pales in comparison with what unites us.

It is some political parties and some politicians who wish to divide and rule, exploit fears, and summon us to join them in the gutters of hatred. This is so in all countries – East and West.

Nevertheless, there is no cause for complacency. Extremism has to be nipped in the bud.

Creating unity in diversity is a long-term process that requires constant strengthening and recalibration. The job is not the government’s alone. All citizens have a role to play.

We must recognise that our diversity, heterogeneity, pluralism and multi-culturalism are assets despite the inevitable challenges they pose. We must admit that our cultures are intermingled and interdependent.

For centuries, Malay, Chinese Indian, Indonesian, Thai, Kadazan-Dusun, Iban and European cultures have mixed on our soil to constitute our rich cultural mosaic.

We must distinguish between racism (which is hatred for others and a desire to keep them down) and race-consciousness, which is a positive desire to help the upliftment of a community, not necessarily our own.

While venerating our religion, we must never condemn other faiths. We must not stereotype any race or religion.

The government, in turn, must be prepared to revamp our educational system, which must nurture

tolerance, mutual respect and inter-cultural dialogue. It must bring the learners together, not

separate them on grounds of race, religion or language. If young people do not learn together, how will they live together?

It is submitted that common elements in vernacular and national education can promote unity in diversity. The ethnic diversity of school teachers and school principals must be restored. We must use school sports as a uniting force.

We must promote interfaith studies and teach people that the primitive ethic of tribalism, racism or religious exclusiveness has no place in modern society. The circle of life has expanded. We are all brothers and sisters on this big blue marble.

We need to impart in our education system knowledge of the Constitution’s glittering generalities, especially its provisions on inter-ethnic relations. If we read about the making of

the Constitution, we will see that by far and large, the forefathers of our Constitution, especially Bapa Malaysia Tunku Abdul Rahman Putra Al-Haj, were animated by a remarkable vision and optimism of a shared destiny among the various people of the peninsula and Sabah and Sarawak.

The Constitution, even in its “ethnic provisions”, sought to avoid extreme measures and provided for a balance between the interests of the “bumiputra” and “non-bumiputra” communities. It is submitted that lack of familiarity with the basic charters’ provisions even within the top echelons of the civil service, police, parliamentarians and politician is contributing to the present state of unease. This can be remedied.

We need to provide a new statutory, institutional framework for reconciling race and religious conflicts. A new National Harmony Act should have a triple purpose. First, to administer cautions whenever peace is poisoned by hate speech or actions. Second, to try to bring parties together through education and conciliation. To this end, a Community Mediation Council could be set up. Singapore offers such an example.

Third, to impose sanctions as a matter of last resort when conciliation fails. Sanctions, when imposed, need not be custodial. Community service, injunctions and damages may be better alternatives.

We need to learn from the good example of other countries. In many, including Singapore and the UK, the law is being used to socially engineer a more tolerant society. There is no shame in emulating others and building our garland with flowers from many gardens. In fact, the peninsula can look to Sabah and Sarawak’s good example of unity amidst diversity.

The special position of Sabah and Sarawak in 1963 has been deeply compromised in many areas, partly due to the acts of their own

past leaders. There is little doubt, however, that some constitutional amendments, some federal policies and some superior court decisions have been insensitive to the rights of these states.

The Orang Asli do not qualify for the special position of Malays and the natives of Sabah and Sarawak. However, Article 8(5)(c) talks of their protection, and more needs to be done to bring the rays of justice to these forgotten people.

There are no ideal electoral systems, but it is generally true that the single-member constituency system we operate makes it difficult for ethnic and religious minorities to win seats. Reforms to the system to accommodate some multi-member constituencies under a proportional representation system may give minorities more representation. If more constituencies are racially mixed, political parties will be forced to give up extreme race or religious agendas and to adopt more inclusive policies.

Finally, the Malay Rulers can play a role to heal the nation. They are the sovereigns for all citizens in their states. They are the head of Islam in their territories. They have power as members of the Conference of Rulers under Article 38(2) to deliberate on any matter they think fit. Their Majesties can play a significant role to moderate extremism in all forms and to build bridges of understanding.

Prof Shad Faruqi is holder of the Tunku Abdul Rahman Chair at UM, and the Tun Hussein Onn Chair at ISIS Malaysia. The views expressed here are the writer’s own. 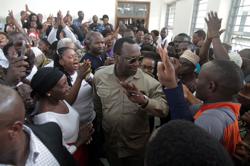