Rules for election to federal throne

THE resignation of the Sultan of Kelantan from the office of the Yang di-Pertuan Agong on Jan 6 was unprecedented but hardly a constitutional crisis, as it did not adversely affect the administration of the nation.

The King is a constitutional monarch who is head of state but not head of government. In the performance of most of his functions, he acts on advice.

Though there are a few areas – such as the appointment of a prime minister or the premature dissolution of the Dewan Rakyat – where the Constitution invests him with discretionary powers whose exercise can alter the course of the nation’s history, such matters are not in play at the moment.

Our Constitution-makers had the foresight to contemplate a vacancy in the office of the King due to ill health, absence, resignation or removal.

Our Constitution wisely provides for a Deputy King (Timbalan Yang di-Pertuan Agong) and the nation is blessed that the present one’s saga­city kept the ship of state on an even keel during the last few months.

The peaceful and orderly resignation of the King indicates that our Constitution works. A peaceful trans­fer of power is possible at all levels. The episode enhances the prestige of the Conference of Rulers as a protector of the dignity of the monarchy and a conscience keeper of the nation.

The immediate task at hand is the election by the Conference of Rulers of a King and a Deputy King. The existing Timbalan Yang di-Pertuan Agong does not automatically ascend to the federal throne. 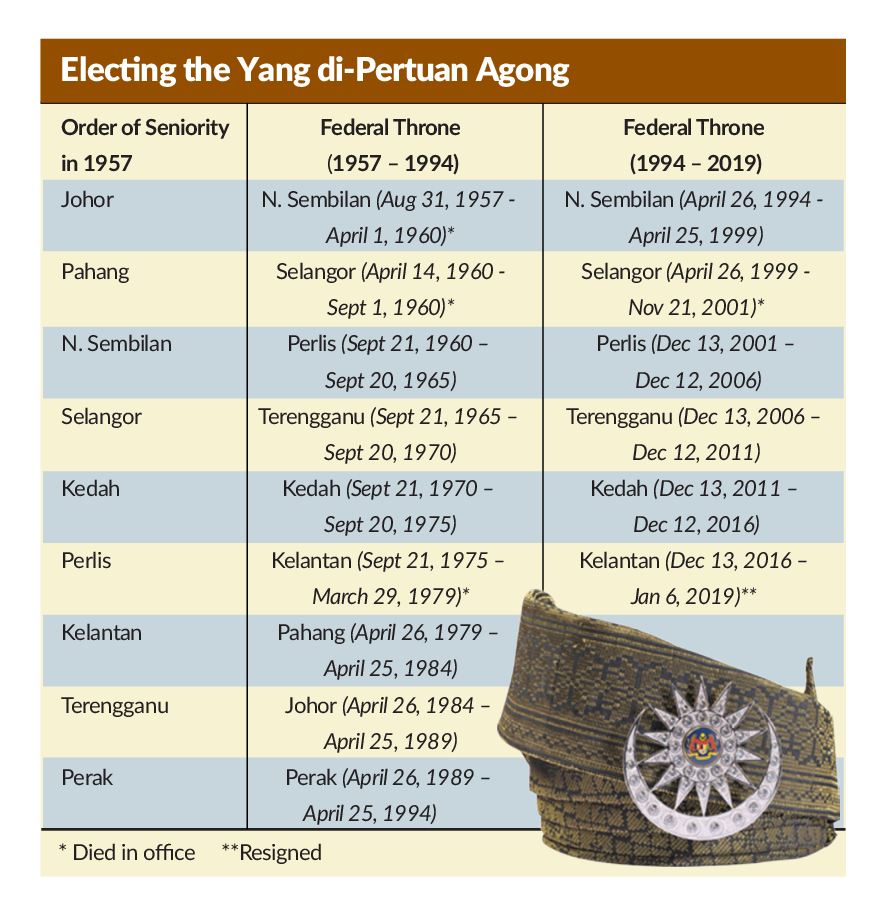 The Third Schedule of the Constitution provides a number of complex rules for the election of the Yang di-Pertuan Agong. Among them are the following:

• Section 4(1): In 1957, an election list was drawn up by reference to the precedence Their Highnesses recognise among themselves. The list undergoes constant variations with each election, death, removal or abdication.

• Section 2: The Conference of Rulers is required to offer the throne to the Ruler of the state that is first on the election list and if he declines, then to the next and so on until a Ruler accepts the office.

• However, seniority is subordinated to a battery of other considerations.

• According to Section 1(1)(b), a Ruler may decline. In 1957, Johor and Pahang (who were ranked No.1 and No.2 in seniority) declined the federal throne and got their turn only as the eighth King and seventh King respectively.

• Section 1(1)(a): Minority is a disqualifying factor.

• Section 1(1)(c): If by a secret ballot, five members of the Con­ference of Rulers resolve that a Ruler is “unsuitable by reason of infirmity of mind or body or for any other cause to exercise the functions of the Yang di-Pertuan Agong”, then the Ruler is bypassed.

• Section 4(2)(a): If a Ruler declines or is bypassed, he moves to the end of the election list.

• Sections 4(2)(a) and 4(4)(b): A Ruler who is elected is not eligible for the next election. He cannot be extended and must wait until all the other Rulers have had their turn.

• Section 4(2)(b): Once there is a change in the Ruler of a state, the state moves to the end of the election list.

There are a number of interesting facts regarding the election of the Yang di-Pertuan Agong over the years (see table).

An orderly rotation is evident so that every Sultan gets a chance. Seniority or precedence is a factor but not a conclusive one. By 1994, all Sultans had taken their turn.

We are now in the second cycle with the states of Negri Sembilan, Selangor, Perlis, Terengganu, Ked­ah and Kelantan having adorned the federal throne twice.

The second cycle commencing 1994 has faithfully followed the rotation of the first cycle.

Four Kings have died in office: the Rulers of Negri Sembilan (1960), Selangor (1960), Kelantan (1979) and Selangor (2001). The Rulers of Selangor and Kelantan have unfortunately failed in both cycles to complete the five-year term.

The nation awaits the 16th election with bated breath. On the rotation system created for the first cycle, Pahang, Johor and Perak are high on the list. But Section 4(2)(b) of the Third Schedule suggests other possibilities. Ultimately, five out of nine Rulers will decide.

The rules in the Third Schedule are subject to the overriding discretion of the Conference of Rulers to offer the throne to whoever is deemed most suitable.

One final word on the Sultan of Kelantan, who gave up his federal throne. His Majesty’s position as the Sultan of his state is unaffected by his resignation. Article 71 of the Federal Constitution gives an iron-clad guarantee that the right of a Ruler to succeed, hold, enjoy and exercise the rights of a Ruler shall be determined solely by the State Constitution. Neither the federal government nor the Conference of Rulers can interfere.