Monday was historical for me.

I played football at Stadium Merdeka on Merdeka Day. To top it off, living legend Datuk Santokh Singh, wearing the yellow Malaysian jersey, was in the stands.

The historic stadium, built between September 1956 to August 1957, was the site of the formal declaration of independence of the Federation of Malaya on August 31, 1957.

It was a venue for historical football matches and concerts. One of the matches which I vividly remember – and immortalised by YouTube – was when Malaysia beat South Korea 2-1 to qualify for the 1980 Moscow Olympics.

I played right midfielder for the 'Malaysia For Unity' team against Royal Selangor Club. The friendly match ended 1-1. It was a good result against an organised opponent.

The once-in-a-lifetime chance to play on Merdeka Day at Stadium Merdeka in Kuala Lumpur came from Collin Swee. He and Syed Sadiq Albar are the co-founders of Projek57, a social enterprise committed to building unity and hope among Malaysia youths.

Swee told me he organised the friendly match because Merdeka Day evokes the memories of Tunku Abdul Rahman and Stadium Merdeka.

"It is a very special day that reminds me of how we started as a nation.

"When the opportunity came to organise this 'Unity Football Game' at Stadium Merdeka, I immediately accepted it," he said.

The Projek57 co-founder said 2020 was a challenging year for Malaysians with so many hurdles in the health, socio-economic and political fronts.

"Everybody is facing this. But I think it is important to remain positive and to continue to shine the light, rather than curse the darkness," he said.

Swee, a solid central defender, was happy that he managed to get friends from different cultures, heritage, beliefs and states in Malaysia to come to Stadium Merdeka to celebrate the spirit of strength in diversity and unity.

It was a proud moment for him to be a Malaysian. 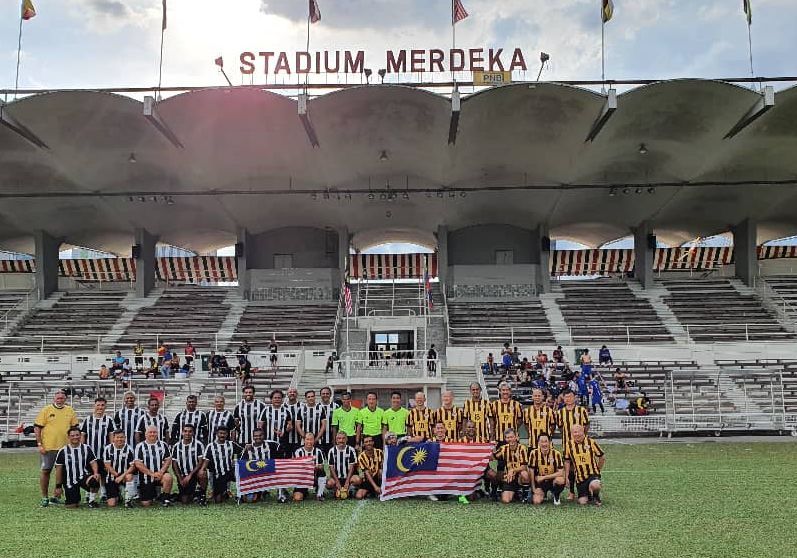 "It was a wonderful occasion, and I achieved my dream of playing in Stadium Merdeka, where my football idols like Datuk Santokh Singh and Datuk Soh Chin Aun used to play and represent the Malaysian team during the golden era of Malaysian football.

During the second half, I took a break from playing and sat at the stand with Santokh to watch the game.

I asked the 68-year-old national team central defender his thoughts on Merdeka Day. The national hero lamented that nowadays the spirit of togetherness was lacking among Malaysians.

"For me, Merdeka was when all races happily got together like the old days when you visited individual houses. Let's be united and not divided," he said.

I should have told him that there was still hope as those who were playing in the match he was watching, although mostly veterans, were multiracial and multireligious Malaysians.

I asked Santokh what his most memorable game in Stadium Merdeka was. He said it was the Malaysia vs South Korea match.

"We beat South Korea in this stadium. The feeling was fantastic.

"We qualified for the 1980 Moscow Olympics. That was THE tournament we could qualify. Don't talk about the World Cup," he said, adding, "However, it was sad that we didn't go."

(The United States and countries like Malaysia boycotted the 1980 Moscow Olympics in solidarity against the Soviet Union's invasion of Afghanistan.)

It was a "real" Malaysian team which won against South Korea, according to Santokh.

"It was a team of all races. I hope we go back to the original Malaysia spirit," he said.

"They got the ball there," he said, pointing at the left side of the padang where the Malaysia defence, including him, was in the historic game.

"Then they said cucuk Hassan, he (Hassan) cucuk (poke the ball) one fellow (South Korean player) and then he cucuk the second fellow. Then he came into the D box and passed to James Wong. And James Wong pretended to kick the ball.

They got the ball there, he said pointing at the left side of the padang. Then they call cucuk Hassan, he cucuk one fellow, then he cucuk the second fellow, then came in the D Box, he passed to James Wong.

"And James Wong pretended to kick the ball and beat a defender and scored," he said.

Today, I watched how the goal was scored on YouTube. It was a proud moment to be Malaysian. We beat South Korea and entered the Olympic Games. As a Sabahan, I was proud that two of my fellow countrymen contributed to the goal.

It was a diverse Malaysia in action. Footballers from Peninsular Malaysia (Santokh and Jamal Nasir) and Borneo (Datuk James Wong and Datuk Hassan Sani) combined to create a winning team.