Democratic progress: Although he lost, Saifuddin believes the high number of voters who returned home to Temerloh to vote in GE13 was a good thing for the country.

IF you were voting in Temerloh parliamentary seat in GE13, who would you have voted?

“When you count the votes, you will see that 35 voting districts were not enough for me to win. So, I lost one zero seven zero votes because of the six predominantly Chinese voting districts.”

(After his defeat, Saifuddin was appointed Global Movement of Moderates Foundation CEO. In Oct 2015, he quit Umno to join PKR. He is now Pakatan Harapan secretariat chief.)

There was no reason for the ex-Higher Education Deputy Minister to have lost, said Datuk Dr Mohammad Redzuan Othman, who is a former Universiti Malaya Centre of Democracy and Election (UMcedel) director.

“Temerloh seat has an army camp, postal votes, orang asli and Indian voters and two Felda settlements. With these ingredients, (there was) no way for Barisan Nasional to lose,” said Mohammad Redzuan, who when he was with UMcedel conducted a post GE13 survey on the constituency. 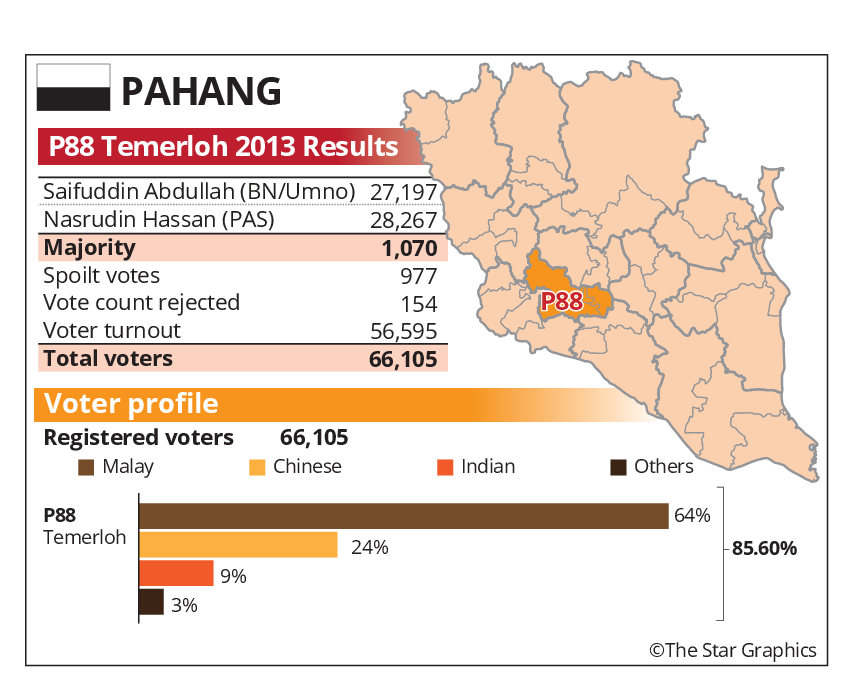 “It lost because at that time the mood (among the Chinese) was ubah (change). If you compare GE12 voter turnout, which was 76%, to GE13, which was 86%, you can see that there was an increase in people turning up to vote,” he said.

Mohammad Redzuan and his team found out that there was a high number of Chinese voters staying outside of Temerloh including those living overseas, who returned to their hometown to vote.

“It was very high. It was unprecedented. As a democrat, I will always say it is a good thing,” said Saifuddin.

In a face-to-face survey about three months after GE13, UMcedel asked the Chinese why they voted for PAS’ Nasrudin, who is also known as Tantawi.

“They told us, ‘we voted for Tantawi because we were forced by our children to vote for Pakatan Rakyat’,” said Mohammad Redzuan, adding that the children were living outside of Temerloh in Malaysia and overseas in countries like Taiwan, Hong Kong, Singapore, New Zealand and Australia.

“The children did not know who Tantawi was but they asked their parents to vote for him as they wanted ubah. They did not think of who the candidate was and voted for the party (PAS).”

About 7,000 outstation voters returned to cast their ballots and they contributed to the incumbent’s defeat. Saifuddin said many of the voters living outside Temerloh especially those residing overseas did not know who he was or what he stood for.

“Those who lived in Temerloh – their parents and siblings – knew me. That’s why even before the election, I received quite a significant number of texts from Chinese and non-Chinese, saying: ‘Din, sorry, we like you but we can’t vote for you this time’,” he said. “They didn’t vote for me as I was from Umno. They voted for PAS. They voted based on party and not candidate.”

His survey revealed that public acceptance of Saifuddin, who was then an Umno Supreme Council member, was about 60% and many did not know the PAS candidate.

“They did not vote for Saifuddin because of his party, Umno,” he said.

The place to meet up with Chinese voters in Temerloh parliamentary seat was Kedai Kopi Yin Heng in Mentakab town. On a Saturday afternoon, elderly men would be playing Chinese chess intensely at the coffee shop. The patrons were the type who would scold a Chinese-looking Kadazan for not speaking to them in Chinese.

“We voted for PAS in GE13 because it was part of Pakatan Rakyat. DAP had asked us to vote for PAS,” said a 58-year-old sawmill worker, who only wanted to be named Ah Chuan.

“I did not know who the PAS candidate was. All I knew was to vote for the moon symbol.”

Ah Chuan’s friend, who was chatting with him on the same table, also admitted that he voted for PAS because of ubah.

“However, I will never vote for PAS ever as the party since the death of Nik Aziz has eaten dedak (animal feed),” said 47-year-old Ah Kong, referring to former Kelantan Mentri Besar and PAS spiritual leader Datuk Nik Aziz Nik Mat.

After GE13, Ah Chuan found out that he had voted for a politician, who went against his political ideology. Tantawi, he discovered, was against Valentine’s Day and was in favour of hudud laws.

Ah Chuan regretted voting for PAS. In the UMcedel’s survey, 57% of the Chinese respondents regretted that Saifuddin had lost.

And 65% of the Chinese hoped that Saifuddin would continue to bring perubahan (change) in Temerloh.

“They regretted because after their children left Temerloh, it was them – through their elected representative – who had to ask the government for help,” said Mohammad Redzuan.

In GE14, will you vote for the candidate or the party?