Muda and Warisan: A courtship between new and old politics

A useful match: Syed Saddiq (left) and Shafie are being pragmatic and tapping the strengths of each other’s parties. — Filepics/The Star

Will a union between a young bride and an experienced groom last – and be productive?

ON the surface, a pact between Muda and Parti Warisan Sabah seems ideal.

Muda co-founder Syed Saddiq Abdul Rahman, 28, is seen as a fresh political face for urban youth while Warisan president Datuk Seri Shafie Apdal, 63, has lately been pushing his brand of unity politics. The possible pact would be a union of urban youth power and a Sabah-based multiracial party.

On a programme called Friendly Chat – We Unite held at night on April 17 on Facebook, Shafie and Syed Saddiq signalled that a Muda-Warisan pact is imminent. Sources in Muda informed me that the announcement would be made after Hari Raya next month.

Soon after Warisan lost the Sabah government in September last year, it announced that it would spread its wings to Peninsular Malaysia by repositioning itself as a national party with a call for Malaysian unity as a way forward.

Tony Paridi Bagang, a senior lecturer at the faculty of administrative science and policy studies in Universiti Teknologi Mara Sabah, believes Muda and Warisan have made a strategic move to provide people with an alternative. “Whe-ther it is suitable or not is secondary, but at least this new pact will provide another dynamic in Sabah politics and is an attempt to go beyond old identity politics, ” he said.

James Chin, a professor at the Asia Institute, University of Tas-mania, Australia, describes the possible pact as a marriage between newbies. He pointed out that Wari-san is new in Peninsular Malaysia and Muda is also new (so new it has yet to be registered).

“On the surface, the pros are quite good. Warisan can tap into the youth vote through Muda. Muda will have access to Warisan’s ready-made infrastructure to break into Sabah. Plus, if Muda’s registration is delayed, they can use the Warisan logo in GE15, ” he said.

“What is interesting is Muda is primarily a threat to PKR and DAP as it is going for the anti-establishment youth in urban and semi- urban areas – those parties’ political base. So Muda will clash with DAP and PKR, ” he said.

Warisan’s foray beyond Sabah, Chin said, is also an interesting experiment as it is the first party from Borneo to try to move in a big way into Peninsular Malaysia. He acknowledged that Shafie is well known in the peninsula as he was once one of the top five leaders in Umno: “But the problem is that the Malays in Peninsular Malaysia are quite conservative, and I doubt they will want to vote for a Sabah-based party, so that is where Muda comes in to help provide better branding for Warisan, ” he said.

But if you look beyond the surface, Muda is new politics while Warisan is old politics.

For most non-Sabahans, Warisan is a refreshing party promoting unity (its campaign slogan is “In God We Trust, Unite We Must”). But Warisan is headed by a president with Umno DNA and a vice president – Datuk Peter Anthony – who is facing corruption charges. It also has “grandpa politicians” with archaic worldviews, like former Tourism, Arts and Culture Minister Datuk Mohamaddin Ketapi who told a German news organisation there are no gay people in Malaysia.

Warisan also practises “old politics”. It formed the Sabah government after GE14 in 2018 when it accepted Barisan Nasional assemblymen. It bred at least 11 political “frogs” when it was in government for 26 months.

A Muda insider explained that the party needs to explore a pact with other political parties as the Registrar of Societies has not appro-ved its registration. Muda needs a party logo to contest in GE15 and it can’t field independents.

“As independents, we have to use logos such as a key or car and there is no guarantee that Muda can use a common independent logo as the symbol is picked by balloting. If we go into the election as independents, we are likely to be wiped out, ” he said.

“Notwithstanding the political baggage Warisan is carrying, we have to be pragmatic and at the same time stick to our ideals.”

The Muda insider also said the political reality is that only Shafie is excited about offering Warisan’s platform to the yet-to-be-registered party. “The other opposition parties like DAP, PKR and Amanah are not keen for us to use their logos.”

The Muda insider revealed that the Sabah-based party had actually wanted Muda to be a part of Wari-san’s structure earlier.

“Muda co-founders rejected the idea. And yet Warisan is still willing to sit down and explore an election strategy with Muda now, ” he said.

At the suggestion that Muda should “buy up” a dormant political party, the Muda insider said it is out of the question. His party does not have such funds – a couple of million ringgit would be needed. It is also not willing to give positions to other party’s leaders in Muda.

In other words, the likely pact between Muda and Warisan is for the yet-to-be-registered party to use the logo of the Sabah based party in GE15.

Bagang of Universiti Teknologi Mara Sabah believes that Muda has no option but to go for a pact with Warisan: “The Warisan president has Umno DNA but his leadership approach – at least – offers something more pragmatic. He listens, gives opportunities and has confidence in young people/leaders to play a significant role in politics. Concerning Peter Anthony’s corruption charges, well, he is innocent until proven guilty, ” he said.

Will urbanites in Peninsular Malaysia accept the Warisan flag? Bagang said pragmatic voters would see the pact beyond the party logo: “It’s too early to say whether they will be accepted or rejected but let’s see how Muda/Warisan deals with it, ” he said.

University of Tasmania’s Chin contends that while people could attack Warisan and Shafie as he has Umno DNA, politics in Malaysia is moving so fast that the accusation won’t stick: “If you use this accusation, then nobody can survive in Malaysian politics as everybody’s hands are dirty, ” he said.

He has a point. The best example is Tun Dr Mahathir Mohamad. When Dr Mahathir was in power, DAP and PKR demonised him and their support base was anti-

Mahathir. However, when the former prime minister joined forces with the two parties, their members embraced him because they hated Barisan more.

Will the contradiction in the pact – Muda is pushing for new politics while Warisan is old politics – have a negative effect? Chin sees the move as positive.

“Those in Peninsular Malaysia who are fed up with the current political set up might look to Sabah and Sarawak as they have the idea that the two Borneon states are more multiracial so they might embrace Warisan, ” he said.

The Muda and Warisan courtship between old and new politics is not a done deal, though. The yet-to-be-registered party is still considering all options. 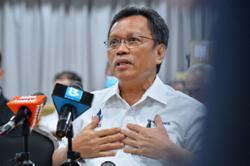