Back to race politics in Semenyih

It looks like the upcoming by-election is going to be about which party is more Malay and Muslim. Sounds familiar?

IF Barisan Nasional hadn’t won Cameron Highlands, the upcoming Semenyih by-election would have been just another by-election.

However, Barisan grabbed about 90% of the total number of Malay votes in the Cameron Highlands parliamentary by-election on Jan 26. The big question in the Semenyih by-election – polling will be on March 2 – is whether Barisan can repeat its performance in a state where urban Malays are supportive of Pakatan.

Pakatan would also not want to see a defeat right after Cameron Highlands.

To get an insight into the seat, I met up with PSM politician S. Arutchelvan who contested in Semenyih in GE12, GE13 and GE14. He is not contesting in this by-election.

His best result was in 2008 when he contested on the PKR ticket in a straight fight against Barisan. He received 10,448 votes, which was 1,140 less than what Umno’s Datuk Johan Abd Aziz got.

The constituency, which is hemmed in by Kajang town and the border of Negri Sembilan, is a semi-rural seat, a big seat in terms of voters: 53,257. 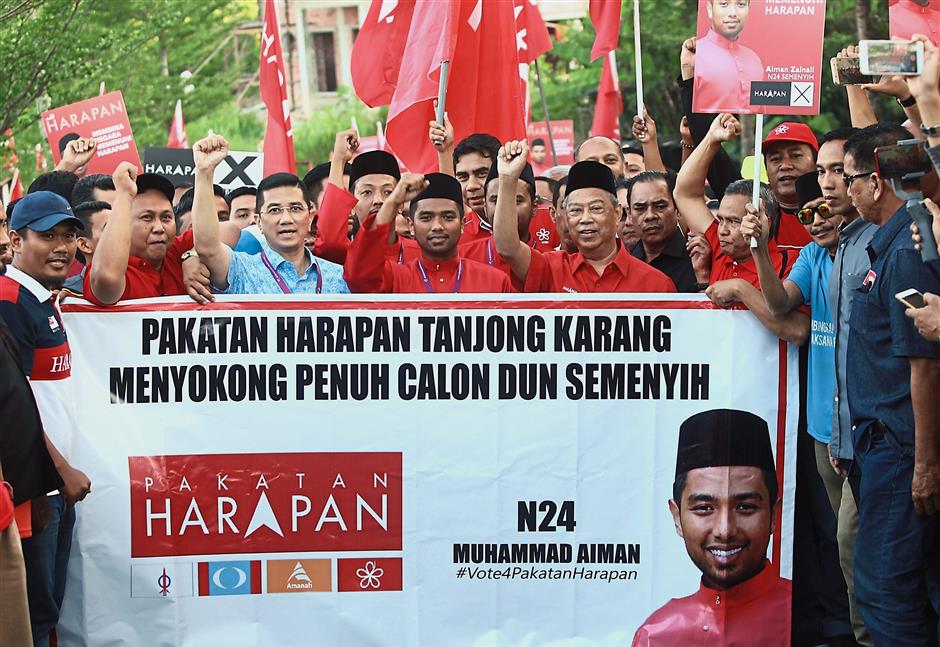 A bulk of urban Chinese voters in housing areas closer to Kajang town were taken out of the seat. The Barisan government redelineated it to make sure Umno retained it.

But the reverse happened. Barisan lost a seat that it had never ever lost.

“In GE14, Pakatan won with a high majority. It was quite shocking to me as I expected a close fight (between Pakatan and Barisan). And I expected BN to win,” said Arutchelvan.

Arutchelvan’s number of votes dropped compared to GE12, when he won 5,568, because his urban supporters voted in polling stations that had been redelineated.

Pakatan, he said, won the seat because:

1) The Chinese overwhelmingly voted for the opposition. From about 75% of Chinese voters supporting the opposition, it went up to 95% in GE14.

3) Umno machinery was not moving as much as it usually did. Barisan conducted a national campaign focused on its chairman, Datuk Seri Najib Tun Razak, and there wasn’t much funding allocated to grassroots campaigners.

“Here in Semenyih, the urban Malays shifted to PH. I observed this in the voting pattern from Penjara Kajang. There are about 800 wardens. Normally, 95% of them would vote for BN. But in the last election, 50% voted for PH,” Arutchelvan said, adding that it was the same for the policemen.

“The young Malays also voted for PH. The traditional Umno voters in their strongholds in villages remained loyal to BN,” he added

It looks like he won big. But his margin of victory is deceiving. Technically, argued Arutchelvan, Pakatan won Semenyih by 705 votes.

Nine months ago, in GE14, Arutchelvan noted that the mood in Semenyih (except in the Umno and PAS strongholds) was for change, especially among the Chinese and the Indians.

“When I met Malay voters, they were very quiet compared to the Chinese. For the Chinese voters, it was clear cut that they were going for PH,” he recalled his interaction with voters during campaigning.

“Generally, the PH campaign succeeded as people were talking about no toll or lower fuel prices if it won. (Tun Dr Mahathir Mohamad) had also convinced the Malays who were fence sitters to support PH.”

The younger voters, including the Malays, observed Arutchelvan, were swayed by Pakatan’s social media campaign. “It was very effective especially on issues like 1MDB and kleptocracy. You could feel the momentum was for PH,” he said.

The general mood in Semenyih, according to Arutchelvan, is against Pakatan.

“The mood lately is swinging towards Barisan. I feel it talking to people on the ground especially after the Cameron Highlands by-election,” said the politician.

“My concern is that there is a general frustration with Pakatan among all races. Of course, among Malays, it’s worse. In rural areas, they are talking about rubber prices and palm oil prices going down.”

It is sad, said Arutchelvan, that some Malaysians still see things very racially.

For example, he said, Malays in rural areas in Semenyih perceived Primary Industries Minister Teresa Kok as a Chinese from DAP who is not bothered about the smallholders from their community but only (allegedly) takes care of Chinese towkays.

“This kind of campaign (in the Malay community) is really catching fire,” he said.

The Semenyih voters, according to Arutchelvan, expected change to happen after Pakatan won GE14. They thought that the price of goods and fuel would go down and that highway tolls would be abolished, he said.

“The expectation was very high. But as time passed, they found that things have not changed,” he said.

He continued: “When you talk to normal people, even small things – good policies like banning smoking in restaurants and eateries – are making them angry as their life has not improved. People are feeling that they are being punished (by the no smoking policy) and that is causing unhappiness.”

Arutchelvan feels that some of those who voted for Pakatan are now starting to rindu (miss) Johan, the two-term Umno assemblyman who lost in GE14.

“People are saying that during Johan’s time when you needed financial help, it was easier to get,” he said.

The Pakatan service centre, he added, is in disarray.

In GE14, the seat was a PKR seat but, at the last minute, it was given to Bersatu. PKR was not happy that it had to give way. “Now, if you go to the PKR office to ask for help, they would say go to the Bersatu office. Pakatan is not organised even nine months after winning the seat, and it has been running Selangor for two terms,” he said.

The Semenyih by-election will be largely about Bersatu versus Umno. It will be about which party is “more Malay and more Muslim”.

“That is problematic in any election as when you play the race and religion cards, you will be overdoing it. What will happen is, you don’t question policies and governance,” he said.

The combination of Umno and PAS, noted Arutchelvan, is a force to reckon with in Semenyih.

“After the Icerd (Elimination of All Forms of Racial Discrimination) rally by PAS and Umno – like it or not – it was a huge success. It brought the Malay community closer together,” he said.

“There are also other issues – and this is not my view – but when you appoint Tommy Thomas as Attorney-General or Lim Guan Eng as Finance Minister, the Malays feel insecure.”

It is easy to use these issues as Malaysia is so rooted in racial politics, said Arutchelvan. “It is easy to sell, as the Malays feel that they are losing out,” he said.

For Barisan to win back the Semenyih seat, he said, it needed to win more than 70% of the total number of Malay voters and hope for a low voter turnout among the Chinese and Indians, especially among the younger voters (45% of Semenyih voters are 40 years and below).

“It will backfire, as the more you overdo your attack against Najib, the more the Malays will turn to Umno. However, PH needs him to make the Chinese interested in the by-election and come out to vote,” he said.

Basically, the Semenyih by-election is about which party is more Malay and more Muslim.