The 15km dedicated bus corridor in New Delhi has evoked a public outrage, with the man in the street demanding that it be abandoned even before it has a chance of a fair trial.

LIKE any other growing city in the world, Delhi, the Indian capital, has its share of major problems. Water and electricity supplies are almost always erratic, crime graph perennially on the rise and, of course, living conditions constantly under pressure, only partly due to the influx of migrants from other parts of the country.

Adding to the woes of Delhiites is the problem of public transport. Despite the provision of a well-regarded Metro rail service, controversy persists over the mass rapid transit system best suited for the national capital.

Having commissioned the first and second phases of the eventual 200km Metro network, the city fathers had hoped that they had hit upon the best way to solve the problem of public transport.

But when it dawned on everyone, including ordinary commuters, that the Metro too would not be adequate for the more than five million commuters who travel daily out of their homes to various places – including work, educational institutions, etc – there was pressure to consider another parallel system of mass public transit.

And thus it was that the High Capacity Bus System (HCBS), or Bus Rapid Transit, as it is called in 30-odd cities in Asia and Latin America where it is already operational, was sanctioned on an experimental basis a year ago. 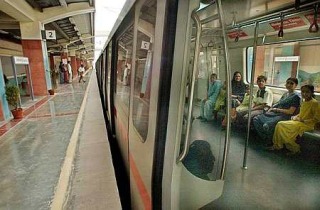 But even before it can be implemented it has proved controversial. Being built through a busy artery, the 15km dedicated bus corridor has evoked a public outrage, with ordinary Delhiites demanding that it be abandoned even before it has a chance of a fair trial.

The protest against the under-implementation HCBS was fuelled by a series of accidents, a couple of them fatal. The division of existing roads by erecting a foot-high stone divider for the dedicated bus lanes takes unwary motorists totally by surprise.

Motorists coming from parts where there is no brickwork on roads to separate the bus lane from the rest of the traffic have invariably hit the divider and ended up in hospital.

A particularly gory accident a few days ago led to the death of a youth in his early 20s, sparking protests and demands that the controversial project be abandoned.

The controversy over the project only underlines the problem of over-crowding in the metropolis. The truth is that Delhi is bursting at the seams.

Built originally to handle less than a million people, its population has now grown to over 1.4 million. According to one estimate, nearly 10,000 migrants land in the city daily to make it their home.

The city has now expanded in all directions, having virtually co-opted suburban towns on its borders in all four directions in the states of Haryana and Uttar Pradesh.

Yet the creation of the greater National Capital Region has not eased the pressure on public transport and other services in Delhi.

Though land prices have skyrocketed in small towns fringing Delhi, employment opportunities continue to be centred in the small area in and around the seat of the national government.

Because the Centre has failed to disperse non-essential offices outside the capital, both the employees and a large number of people dealing with these offices must necessarily commute to the heart of the city.

Admittedly, the Metro was expected to be the panacea for the clogged roads of the national capital. But though it handles nearly 500,000 commuters daily, the problem persists as before. Traffic snarls are a daily occurrence. So is road rage which has occasionally led to fatal fights between angry motorists.

Given that Delhi accounts for a larger vehicular population than the combined total registered in Chennai, Mumbai and Kolkata, it is hard to keep people from driving.

Nearly 10,000 two- three- and four-wheeled vehicles are registered in Delhi on each working day, though admittedly some of these are owned by people living in suburban towns abutting the capital.

It is the bumper-to-bumper rush of these vehicles which clogs the narrow roads where the HCBS project is being implemented.

Even Elattuuvalapil Sreedharan, the 74-year-old head of Delhi Metro, threw his weight behind the critics of the HCBS.

Sreedharan, a national icon for having implemented the Delhi Metro project ahead of schedule and in a manner which caused least inconvenience to the people, is now taking the Metro to satellite towns, such as Gurgaon in the South and Noida in the east.

So high is his public stock that several state governments have sought his services to start Metros in their major towns.