RECENTLY, much hype has been generated around Klaus Schwab’s propagation of the Fourth Industrial Revolution (4IR) as the foremost agenda in the World Economic Forum that he founded.

After Nicolaus Copernicus’ death in 1543, his ideas in De revolutionibus orbium coelestium (On the Revolutions of the Celestial Spheres) began to gradually shift the attention from Ptolemy’s geocentric theory of the universe to the heliocentric idea of planetary revolution around the Sun.

According to Prof George Saliba, the influence of Muslim astronomers in the 9th, 13th and 14th centuries such as Masha’Allah, Mu’ay­yad al-Din al-‘Urdi, Nasir al-Din al-Tusi and Ibn al-Shatir helped Copernicus solidify his theory. Thus, it was through contact with Islam that the West accepted the idea of revolution. Back in the 9th century, Charlemagne’s correspon­dence with Abbasid caliph Harun al-Rashid allowed the West to imbibe copiously from Islam’s fountain of knowledge, thanks to the growth of the sciences in the Muslim civilisation.

Revolution implies a circular course with a beginning as well as an end. The Quranic wheel of mankind’s history began its revolution with Prophet Adam and the souls of all his progeny having covenanted with God and having been bestowed knowledge of the divine prior to the mission of earthly vicegerency.

It ends with the return of all to the Creator in their end states of ei­­ther happiness (sa‘adah) or misery (shaqawah).

No one dominion or rule endures forever but revolves according to the measure of time determined by God.

For this reason, Muslim histo­rians identify periods of dynastic reign as dawlah, whose root word dawala is used to denote alternating cycles that regulate the occurrence of worldly events – night and day, weak and powerful states, and rise and fall of civilisations.

A government’s lifespan is dependent upon its power to dispense justice and regulate people’s affairs. Falsehood and distorted information corrupted the previous religious ways of life (millat), turning clarity into ambiguity and giving rise to confusion and injustice.

Therefore, it is God’s mercy to send pro­­p­hets entrusted with returning their respective peoples back to the path of guidance and clarity after they suffered moral and spiritual devolution (Surah al-Saff, 61:9).

The greatest of these messengers is the Seal of the Prophets, Muham­mad, who uplifted the way of thinking that was suffering confusion from the corruption of meaning.

So powerful was the clarity of guidance that within mere decades his society changed from one that was rife with barbarism into a civilisation that reached the heights of culture and learning.

Islam possesses within itself the internal mechanism to bring back spi­ritual and intellectual clarity through the agency of Prophetic successors – guided leaders (al-a’immat al-rashidin), spiritual guides (al-hudah), scho­lars (al-‘ulama), saints (al-awliya’), and pious people (al-salihin) – who continuously restate and defend the tenets of the religion through the strength of their innermost secret as well as the traditional framework of conveying true report (khabr sadiq).

In today’s context, we may rest assured the awesome power of the human mind will continually conceive new technologies.

However, protecting individual privacy and security remains a formidable challenge in a so-called post-truth world, where the real problem actually could come from truth deficit reflective of society’s moral and spiritual devolution.

Despite its promises of technological convergence, the discourse on the ethical dimension of 4IR leaves much to be desired. The lack of emphasis on the ethical education of Man means information and knowledge would continue to be at risk of being distorted.

Obfuscation of truth impacts on the ability to regulate, administer, and govern affairs properly. Consequently, it disrupts the ability to dispense justice and maintain the orderliness of people’s affairs.

For example, the idea that a rival’s military intelligence could breach a country’s electro­nic voting systems introduces the possibility that an entire nation may lose a war without the first shot being fired. Already nations with enormous populations like China – in ensuring peace and security – are resorting to strict measures by blocking social media platforms and instant-messaging services, especially those whose servers are based abroad.

Additionally, there exists a paradox of the mind that is constantly being distracted by something called “edutainment”; as the presence of mind needed to govern information becomes diminished, so does its ability to govern the human self. How then is it expected to govern others?

Herein lies the danger of rushing headlong into an elaborate scheme that has yet to address the overwhelming of our limited human analytical capabilities by technology’s unprecedented, exponentially increasing ability to capture exabytes of data.

Regulators, policymakers and legislators are finding it hard to cope and adapt to these changes. We need to ensure our insights would not suffer the kind of epistemological scaffolding that obscures the truth.

Muhammad Husni Mohd Amin is Senior Research Officer at Ikim’s Centre for Science and Environment Studies. The views expressed here are entirely the writer’s own. 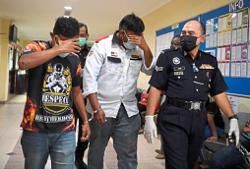