Spoilt for choice: Malaysians buying food before breaking fast at the Mampan Ramadan Bazaar in Rawang.

Prophet Muhammad set the example of how to break fast, and overeating goes against what he practised.

RAMADAN is a holy month for Muslims worldwide, when Muslims fast and refrain from actions that will nullify the fast between dawn and dusk. It is also a month when Muslims focus on increasing their spirituality by observing many acts of worship.

Ramadan provides Muslims with opportunities to reap bounties from God through acts such as prayers, recitation of the Quran, doing charity in many forms and also self-reflection. Among the charitable acts that are encouraged by Islam is for Muslims to provide food for others who are fasting.

That is why it has been a practice among some Muslim communities in the country to give food to neighbours before the breaking of fast. This is quite a norm in the villages and in some neighbourhoods. With urbanisation however, the practice of giving food to neighbours may no longer be widely observed.

Nonetheless, there are many people (as well as corporate bodies) who provide sponsorships for the breaking of fast as well as for the pre-dawn meal (sahur) at their local mosque and surau. This is a noble practice that can help to forge greater unity within the community.

There are also many efforts to provide meals for the breaking of fast for the less privileged such as orphans, old folks, the homeless, the disabled and also students who are away from their families.

Such efforts are commendable, and they are very much encouraged in Islam, provided the intention is pure and not to seek fame or fortune. If the deed is done with the right intention, that is to attain the pleasure of God, then the deed will be rewarded.

This trend has been going on for a number of years now, so much so that it has also attracted many criticisms. Aside from the pricing, the major concern regarding Ramadan buffets is food wastage.

There are hotels that have gone on record to say that patrons will have to finish all the food that they take at the buffet table or pay a fine for the food not finished.

However, whether this actually is practised is another matter altogether. Also, questions arise whether this measure is effective in curbing food wastage.

Ramadan is not about indulging one’s self in food. If one were to observe the examples shown by the Prophet of Islam, we would see that overeating goes against what the Prophet practised. The Prophet broke his fast by eating three dates.

Islam stresses the need for moderation in all actions, and this includes food consumption. There are many traditions from the Prophet when it comes to eating and drinking in moderation, which would also contribute towards avoiding food wastage.

It has been reported from previous years that food that could still be eaten that was thrown away as solid waste amounted to 270,000 tonnes in the month of Ramadan alone. This is a staggering figure, and one that we should not condone, let alone allow to continue.

According to statistics from Solid Waste Management and Public Cleansing Corporation, even on normal days nearly 45% of solid waste in Malaysia consists of food. It is ironic that in a month when people fast, the amount of food wasted is exponentially higher. Wastage, what more food wastage, is very much not in line with the true teaching of Islam.

Consumers have a role in ensuring that food is not wasted.

We must equally acknowledge that those involved in selling food (restaurants, hotels or food traders at Ramadan bazaars) also have a similar – and perhaps bigger – role and responsibility.

What is lacking in Malaysia is a comprehensive plan in preparing food. Those who prepare food (either for their own consumption or to be sold) only think about the ingredients, the cooking and the presentation.

Rarely, if ever, we include the aspect of what to do if the food prepared is not consumed.

If, for the month of Ramadan, we can adopt an approach in also planning how to manage food that is not consumed, that would be a step ahead.

Not only could food wastage be reduced, but it is also a way to look after the environment as we could reduce the amount of solid waste.

Perhaps those involved in the food trade should adopt the approach in planning to manage food that is not sold or consumed.

It is important that we do not over-indulge ourselves with food, especially during the breaking of fast. Over-indulgence would only lead to food wastage. Instead, we should adhere to the tradition of the Prophet in observing moderation when eating and drinking.

Ramadan is not about feasting. Ramadan is about feeling compassion and empathy towards those who are less fortunate.

Through fasting, Muslims learn how it feels to go without food and drink during the day.

It would be a pity if this lesson comes to naught as soon as we break our fast.

Therefore, everyone has a role to play in ensuring that food does not go to waste, and this includes the consumers and also those who are involved in the selling of food, whether they are small-time traders or big hoteliers and restaurateurs.

Dr Shaikh Mohd Saifuddeen Shaikh Mohd Salleh is Senior Fellow and director with Ikim’s Centre for Science and Environment Studies. The views expressed here are entirely his own. 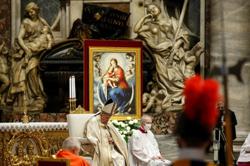 Equip cops properly so they can work effectively
A telling vote on Budget 2021
Piecemeal responses not helping our vulnerable
DBKL act leaves behind bitter taste
Paying the price for Budget U-turn
Partisan gravity
Pakatan leaders facing backlash over Budget U-turn
High hopes for a brighter 2021
Curb Covid-19 with better dorms
Over the Top: Our baggage of history