The volatility in equity markets is transforming into a liquidity crisis which last week also hit the ordinary investor when stock markets worldwide fell steeply. No one knows how wide and deep the crisis will spread.

VOLATILITY in financial markets widened last week and spread across the world. The turmoil is hitting more sectors, having moved from the United States’ mortgage market, to stock markets around the world, and to investment funds operated by banks. 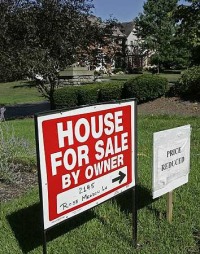 In distress: Signs indicating a home for sale by owner in Cincinnatirecently. The housing and mortgage industries plunging deeper into distress,investors around the world are losing their stomach for risk. — AP

Central banks in Europe, the United States and Asia last Thursday and Friday took action to pump a total of over US$200bil (RM695bil) into their banking systems, in an attempt to prevent the conversion of a liquidity shortage into a full-scale credit crunch and eventually an economic recession.

The coming week will be crucial in whether the financial storms can be quelled or whether they further evolve into hurricanes and cyclones.

Last week ended badly. On Friday, many stock markets fell sharply. In Europe, the fall was an average of 3%, with the UK down by 3.7% and France by 3.1%.

In Asia, stock market indices fell by 2% in Malaysia, more than 2.5% in Japan, Hong Kong and Australia and 4.3% in South Korea.

In the US, the Dow Jones index fell 2.8% on Thursday and share prices were further plummeting on Friday until the central bank injected US$38bil (RM132bil) into the financial system (in addition to US$24bil (RM83.4bil) on Thursday). As a result index closed only 31 points down to 13,239.

The extraordinary moves by the US and European central banks were an attempt stop the steep rise in shorter-term money-market interest rates that had shot above their target levels, resulting from increased demand for cash. The ECB’s target rate is 4% but the short-term interest rate had gone to 4.7%.

The conservative ECB’s intervention was so unexpected and stunning that a Financial Times columnist wondered whether “there is something truly nasty lurking out there in relation to credit losses that only the ECB knows about.”

The actions showed up the seriousness of the situation, as more financial institutions showed signs of being hit by the crisis that started in the “sub-prime” house mortgage sector in the US. Banks and funds that lent or invested in that sector have suffered losses, and other institutions that are linked to these have also suffered secondary effects.

Last week’s biggest shock was the announcement on Thursday that the big French bank BNP Paribas had stopped withdrawals from three of its investment funds, which were exposed to the US sub-prime mortgage market.

The crisis has thus now affected the investing public, which is unable to redeem their investments from the affected funds.

The bank said the freeze on the funds was due to the “complete evaporation of liquidity” in certain market segments in the US (meaning that there were no buyers). The combined value of the three funds was 1.6 billion euros (RM7.5bil), down from 2 billion euros (RM9.5bil) on 27 July.

Other investment funds have also been hit, according to the Financial Times. The North American Equity Opportunities fund run by Goldman Sachs fell 12% in July and another 12% in August so far.

The most publicised European institution hit by the “sub-prime crisis” is the German bank IKB, whose affiliate Rhineland Funding had bought 14 billion euros (RM66bil) of bonds in the US some backed by US sub-prime mortgages.

Massive losses from its operations led to a German government-organised rescue including a 3.5 billion euro (RM16bil) bailout plus 14.6 billion euro (RM69bil) in liquidity guarantees, to be shouldered by other German banks. The chief German financial regulator said there was risk of the worst financial crisis since the 1930s.

In the US, the bank Bear Stearns in early July closed two hedge funds after nearly total losses on bets on sub-prime market worth over US$20bil (RM69.5bil).

The last three weeks’ turmoil has led to uncertainties as to what lies ahead, and how the crisis will play out.

Economist Paul Krugman in his New York Times column last week gave his view of how the drying up of liquidity can produce a chain reaction of defaults.

“Financial institution A can’t sell its mortgage-backed securities, so it can’t raise enough cash to make the payment it owes to institution B, which then doesn’t have the cash to pay institution C – and those who do have cash sit on it, because they don’t trust anyone else to repay a loan, which makes things even worse.”

The scariest thing about liquidity crises, said Krugman, is that it is very hard for policy makers to do anything about them. Central banks can respond by cutting interest rates or lending money to banks that are short of cash

“But when liquidity dries up, the normal tools of policy lose much of their effectiveness,” said Krugman. “Reducing the cost of money doesn’t do much for borrowers if nobody is willing to make loans. Ensuring that banks have plenty of cash doesn’t do much if the cash stays in the banks’ vaults.”

Meanwhile, calls are being made to the financial authorities not only to act to stem the crisis but to investigate the parties responsible and to punish them.

Danny Schechter, editor of MediaChannel.org, and director of the new film In Debt We Trust: America Before The Bubble Bursts, said it is a matter of time before the “subprime” credit crunch is seen for what it is: “a sub-crime ponzi scheme in which millions of people are losing their homes because of criminal and fraudulent tactics used by financial institutions that pose as respectable players in a highly rigged casino-like market system.”

According to Schechter, companies suspended their usual “standards” and “rules” and self-styled “due diligence” and knowingly sucked money out of people with poor credit records. These companies are themselves imploding and collapsing worldwide.

“This was done deliberately, with forethought and malice, a well orchestrated plan to create armies of “suckers” and steal – yes, I said it – their monies to leverage even bigger deals. Their greed had no limits, until the scheme collapsed.

“Behind it all were the so-called “Masters of the Universe,” the wise men of Wall Street who worked behind the scenes to turn mortgage brokers and small lenders into part of what will one day be seen as a criminal network worthy of prosecution under the conspiracy laws.”

“We should demand criminal penalties for the profiteers who started out to enrich themselves and seem to have ended up destroying the very system they misused.”