FOR thousands of years, the Yangtze River has been an important water source for the Chinese, enriching the lands while becoming a breeding ground and home for a variety of marine life.

The rare Chinese Sturgeon is one fish that spawns here.

It is one of the oldest fish on earth, but this precious creature could vanish if not protected.

Known as a living fossil, the Chinese Sturgeon has a very strong ability to adapt to ecological changes and new environments.

It has existed on Earth for 140 million years – witnessing the rise and fall of the dinosaurs and even surviving the ice age.

But this ancient species has lost in the battle against development and mankind, just like many other animals.

An increase in human activity in the river, pollution and overfishing has caused the number of Chinese Sturgeon to decrease year by year.

Today, wild Chinese Sturgeon can hardly be seen and the last natural spawning ground in the river was spotted in 2016.

The fish has been listed as critically endangered by the International Union for the Conservation of Nature (IUCN).

In 1988, the Chinese government added Chinese Sturgeon to its List of First-grade Protective Animals, banning people from hunting them.

Li Zhiyuan, vice-director of the Chinese Sturgeon Research Center, said he was unable to estimate the number of wild stock as they lived in the sea.

However, a report by China’s national news agency Xinhua in 2016 revealed that the number of migratory sturgeons was less than 100.

The Chinese Sturgeon stands out among the 27 sturgeon species in the world due to its huge body.

An adult fish can grow up to 5m-long and weigh 500kg, gaining the King Fish of the Yangtze River title. It has a life span of about 100 years.

Chinese Sturgeon is a freshwater fish although it spends most of its time in the sea, mostly around the south-eastern region.

It feeds on small aquatic animals such as shrimp, crab, fish and insects.

When reaching sexual maturity, usually at the age of between nine and 12, the fish will head to shallow water, entering the Yangtze River estuary from summer to autumn.

It spends over a year in the river, swimming against the current for more than 3,000km to lay eggs in the autumn.

After that, it migrates back to the sea.

The spawning period takes place from midnight to dawn. An adult fish can lay 300,000 to 1.3 million eggs at one time.

The fertilised eggs will hatch in about a week, then the babies swim to the sea in spring the following year.

A baby fish takes between nine and 12 years to reach adulthood. Although the Chinese Sturgeon has super reproductive capacity, less than 10% of the spawn is believed to survive the strong current, natural predators, boat propellers and other threats driven by humans.

The Gezhou Dam project on the river, near Yichang, Hubei province, in the 1980s greatly obstructed the migration route of the fish. The sturgeon were blocked from returning to their original spawning grounds in the upper reaches of the river.

The construction of the Three Georges Dam in the 2000s at a site some 40km upstream of the Gezhou Dam further threatened their survival.

But efforts have been made to preserve this precious treasure of the Yangtze River. In 1982, the Chinese government set up the Chinese Sturgeon Research Center to protect the precious rare fish and to research the reproduction of the species in captivity.

“Since 1984, we have released more than five million Chinese Sturgeon of various sizes to the river,” said Li.

The results of this are not immediately known, but Li said from what they observed, more than half of the fish released by them adapted to the new environment in the wild.

He explained that the fish was highly adaptive.

“When they could not get to the upper reaches, they lay eggs at the lower stream,” he said, adding new spawning grounds were spotted 5km downstream of Gezhou Dam, or some 1,000km from their original sites.

In 1995, the government also set up a natural protection area for Chinese Sturgeon in Shanghai and Yichang respectively.

Chinese Sturgeon is considered a delicacy for the Chinese.

However, some people say that the fish served on the dining tables are either farmed fish or those of hybrid sturgeon or other species of the family. 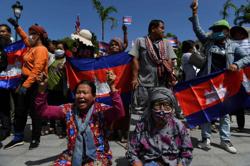