EDUCATION is an important part of life. Although not a guarantee of success, it does shape a person’s career and future.

Compared to about 20 years ago when I started working, a degree nowadays is no longer a golden ticket to a good job. Because access to higher education has improved significantly, there are a lot more graduates and merely having a degree is not likely to make you stand out.

And this worries the parents. Eager to give their children a head start in life, some parents suffocate their kids with never-ending exercises and revision, tuition classes and extracurricular activities so that the juniors would be “successful”.

These parents have forgotten the core purpose of education and place too much weight on test scores.

This was one of the hot topics at the recent annual Two Sessions – the meetings of the National People’s Congress (NPC) and National Committee of the Chinese People’s Political Consultative Conference.

At a press conference held on the sidelines, Chinese Education Minister Chen Baosheng said the country would reform the current exam-oriented education system, including changing how students were evaluated and forbidding the ranking of students based on academic performance.

He urged parents not to overwhelm children with academic and extracurricular activities, and advised against being lured by the advertisements of educational institutions.

“Tiger parents” have become a catchphrase in recent years. It refers to demanding parents who push their children to excel academically and gain vast knowledge and various skills.

Capitalising on this parental anxiety, education-related institutions have mushroomed. The operators offer all sorts of programmes and classes that they claim can help children learn and count faster, unleash hidden talents and become smarter.

In Fantastic Baby, a children’s TV show in China, nearly one-third of parents revealed that their children had at least five extracurricular activities such as music, swimming, arts, English and IQ-building classes.

On this trend, Chen warned parents against falling for certain institutions’ advertising gimmicks and exaggerated claims.

“In recent years, we noticed that advertisements on the philosophies of success of various training institutions are rampant. As a result, our students are loaded with academic work and parents have empty pockets,” he added.

“Don’t trust such groundless claims. We are providing our children with quality education and we want them to grow up in a healthy and good study environment.”

To tackle this problem, China has issued guidelines to regulate education-related institutions.

According to the rules, these centres are not allowed to provide advanced learning programmes to children, whose learning syllabuses must be based on their respective ages.

In addition, these institutions cannot conduct graded examinations for students so as to avoid unhealthy competition among children.

Chen reminded school teachers not to compel students to attend these extracurricular classes. “Teachers who force students to enrol at these institutions will be dealt with seriously, or even stripped of their teaching credentials,” say the guidelines.

On another occasion also during the Two Sessions, Chen addressed the so-called 3.30pm issue faced by working parents.

In China, schoolchildren are dismissed at 3.30pm. This is a problem for many working parents because they usually get home from work much later, leading to difficulties over the care of the children in the hours in between.

Chen praised several provinces that have introduced after-school services for students. He revealed that the Beijing government provided a subsidy of 700 yuan (RM430) per student per year for the after-school programme from 3pm to 5pm, while the local authority of Shanghai has made the programme mandatory at primary and middle schools.

“We will discuss this with the related departments and work together to solve the problems,” he added.

The NPC, which is China’s annual parliament session, concluded last week with Xi Jinping unanimously re-elected as China’s president and chairman of the Central Military Commission. Li Keqiang retained his post as the premier.

The session also saw a major Cabinet reshuffle. After some restructuring and mergers, the State Council (China’s Cabinet) now has 26 ministries and commissions. The new ones are the Veterans Affairs Ministry, Natural Resources Ministry and Emergency Management Ministry.

The Environment Ministry has been replaced with the Ecological Environment Ministry, which enables the government to boost environmental protection and ecological conservation in a more comprehensive way, in line with the Chinese leaders’ vision to build a beautiful China with greenery, blue skies and clear waters. 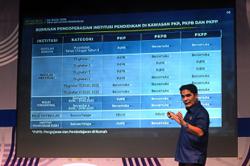