ON 24 February 2020, the leaders of the world’s two largest democracies will meet in Ahmedabad, Gujarat.

Donald Trump and Narendra Modi are birds of a feather – autocrats who think nothing of lying, undermining their respective constitutions, and spewing racist venom. Trump has built facilities to detain Latino “illegal immigrants” near the US’ border with Mexico – Modi’s allegedly doing the same for their Muslim equivalents in Assam.

Is this meeting, the 2020 equivalent of an Hitler-Mussolini encounter from the 1930’s?

But relations between the two giants are far from perfect: trade and investment disputes loom.

To add insult to injury, earlier this month, Modi suffered an electoral defeat in the Delhi Legislative Assembly Elections. The BJP juggernaut – with all its money, media backing and vitriolic anti-Muslim attacks – failed to dislodge the Aam Admi (“Common Man”) Party (AAP) and its unassuming leader, Chief Minister Arvind Kejriwal.

Indeed, the AAP won 62 of Delhi’s 70 Assembly seats with the BJP – which had swept the national capital’s 7 Lok Sabha federal constituencies during 2019’s General Elections—taking the rest.

The bespectacled Kejriwal – a former tax official – is the polar opposite of the bombastic Narendra Modi and his allies: firebrand-monk-turned-Uttar-Pradesh-CM Yogi Adityanath and thuggish Home Minister Amit Shah.

In 2011, Kejriwal, with Gandhian icon Anna Hazare, fronted massive, nationwide protests seeking to pressure India’s government to set up a “Jan Lokpal” (or Ombudsman) anti-corruption body with draconian powers. Breaking with Hazare, Kejriwal formed the AAP in 2012, winning power in Delhi’s 2013 Assembly elections and again in 2015.

Fast-forward to 2020 and the BJP went all-out against Kejriwal, labelling him a “terrorist” for supposedly being soft on the peaceful female Muslim sit-in protestors blockading the Shaheen Bagh area – a crucial traffic artery – over the Citizenship Amendment Act (CAA).

Yogi Adityanath accused Kerjiwal of sending briyani rice to the women. Amit Shah urged Delhi voters to vote for the BJP by pressing the voting machine buttons “with such anger that its current is felt at Shaheen Bagh.”

And yet, it was the BJP that was jolted.

So how did Kejriwal do it?

He may have failed to create the Jan Lokpal due to federal obstruction, but Kejriwal’s administration has provided Delhi’s poor with free electricity and primary healthcare, as well as stronger public schools – it spends 25% of its INR600bil (RM35bil) budget on education.

He conceded that the Shaheen Bagh protestors had the right to demonstrate, but that the roads there ought to be open – in effect avoiding backing them openly.

Furthermore, he rightly argued that power to clear the area actually lay with Amit Shah as Home Minister, who has oversight over Delhi’s police.

Finally, the AAP embraced patriotism and faith. Unlike the Congress Party (which didn’t win a single seat), the AAP supported the controversial abrogation of the special status of Jammu and Kashmir.

Kejriwal’s appropriation of Indian nationalism and Hindu culture can be dismissed as self-serving. But both are here to stay. They are things that will have to be worked around.

Does it mean throwing minorities under the bus? Not necessarily, as the AAP’s example shows. And there’s no point trumpeting pluralism if you do nothing to reduce socio-economic injustices.

As the astute author Sagarika Ghose writes in her column with the Times of India: “Secularism does not mean negation of personal faith. It means that the state must not discriminate between religions. The innovation of AAP is that by treating Hinduism as purely cultural, it refuses to compete on the BJP’s terms and get tangled up in BJP’s pet controversies”.

Conversely, the BJP’s hard-line approach destroyed their own vote base. The AAP became the only viable choice for Delhi’s Muslims (12% of its population). Meanwhile, the BJP was just another option for their Hindu compatriots and not a very great one at that.

Perhaps not. Winning the capital (Trump won only 38% of Washington DC’s votes in the 2016 Presidential polls) is no proof that you can win the country.

Also, Delhi’s voters may have simply voted tactically: the developmentally-minded AAP locally and the ideologically-driven BJP for the Centre.

Indeed, Indian electors tend to go against the national incumbent in regional contests: Modi still won in 2019 despite the BJP losing six state elections since December 2018 until now.

The “real” story of the Delhi Assembly elections is the continuing slide to irrelevance of the Congress.

That’s how Sonia Gandhi propelled Manmohan Singh to the premiership in 2004, by forming alliances with leftist and regional parties.

This has not happened under son Rahul. And until someone can, Modi’s BJP juggernaut will mirror the deity, Jaganath, from which the word originates: “Lord of the Universe” and virtually unstoppable. 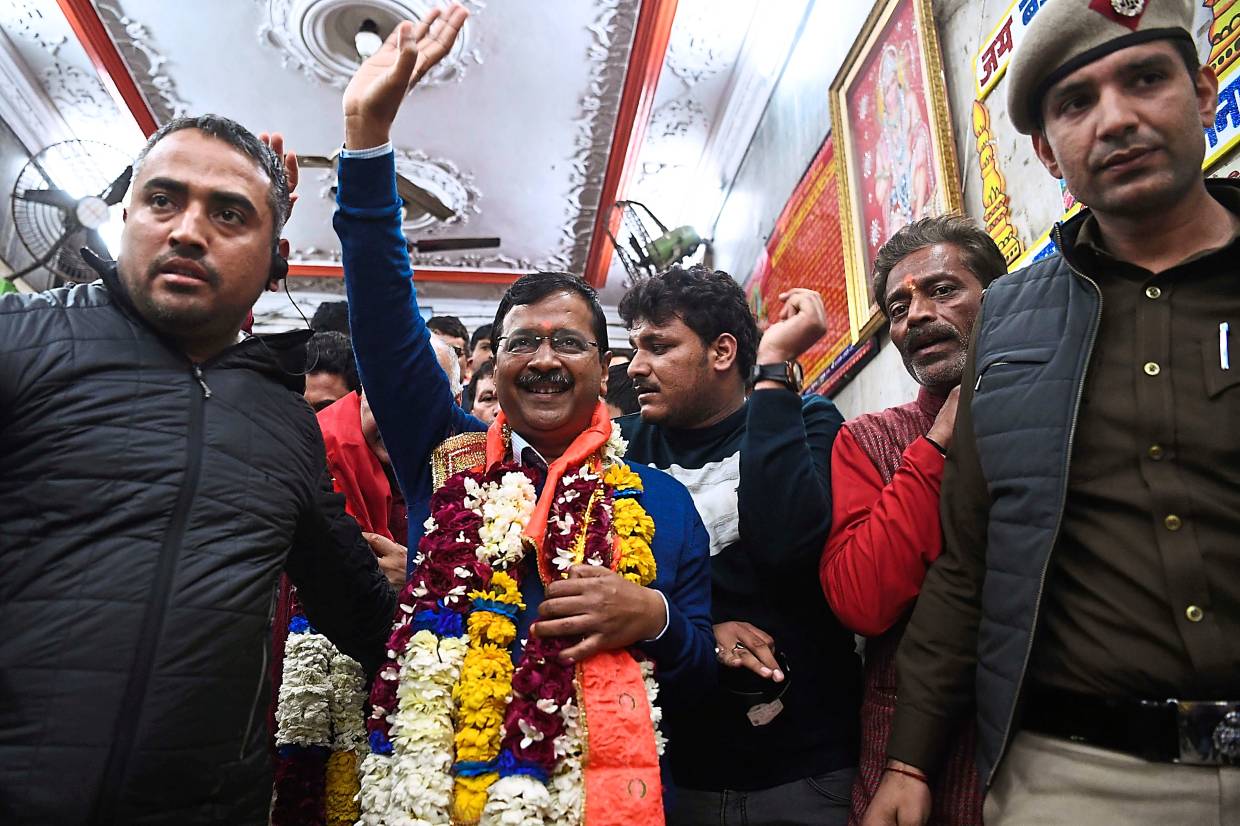 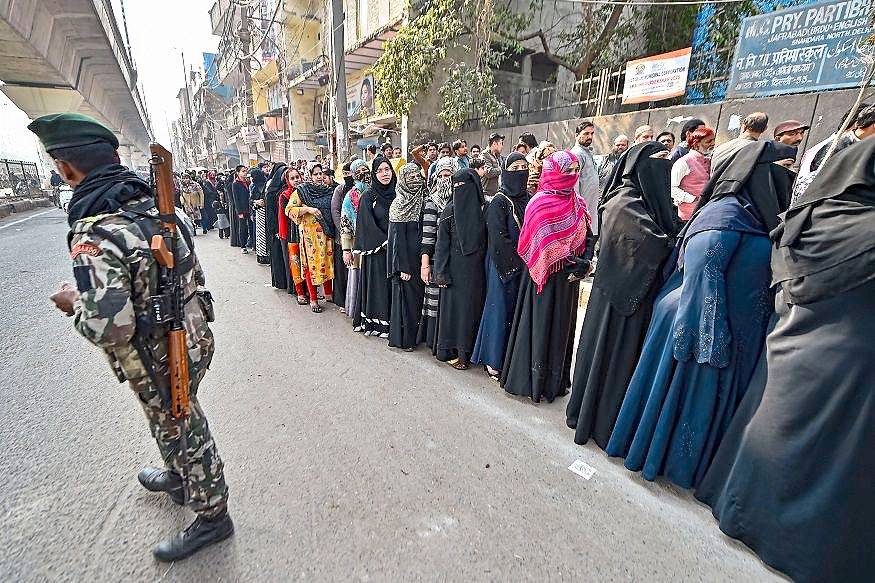 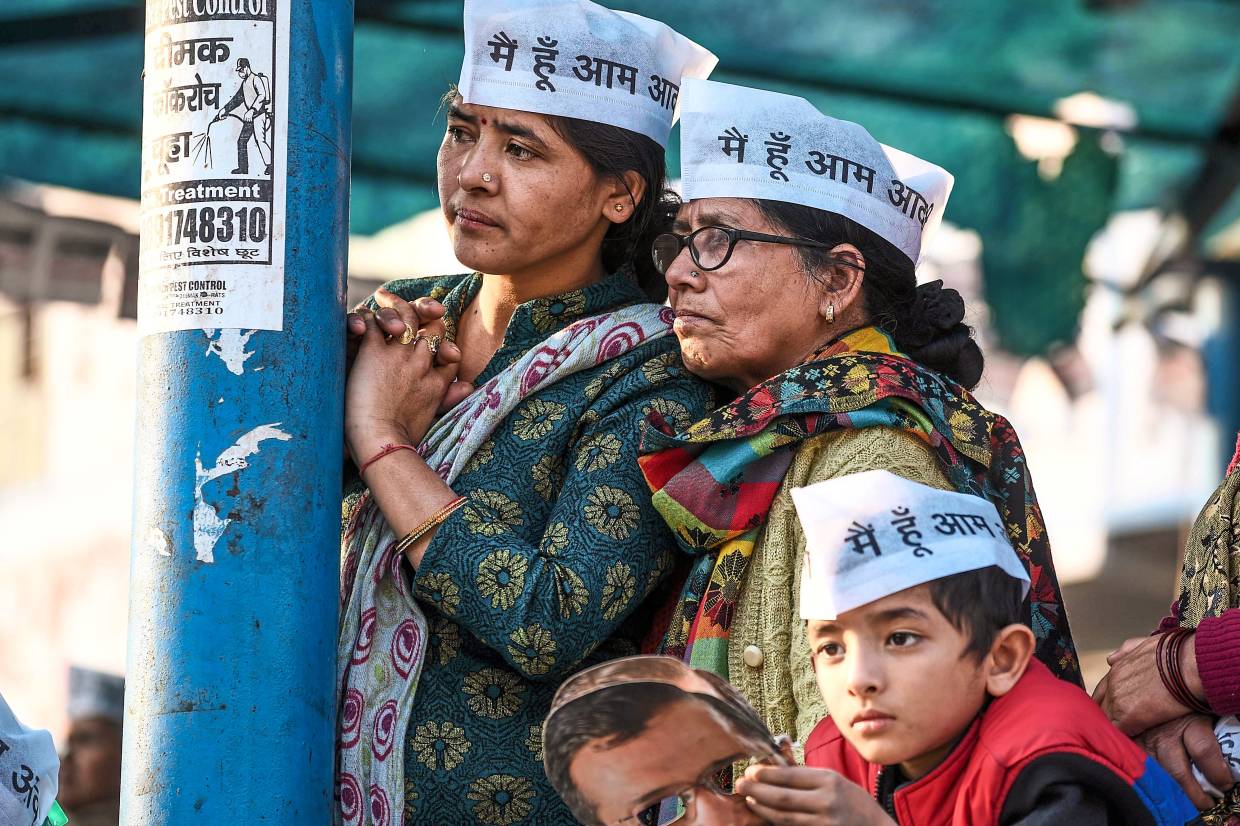 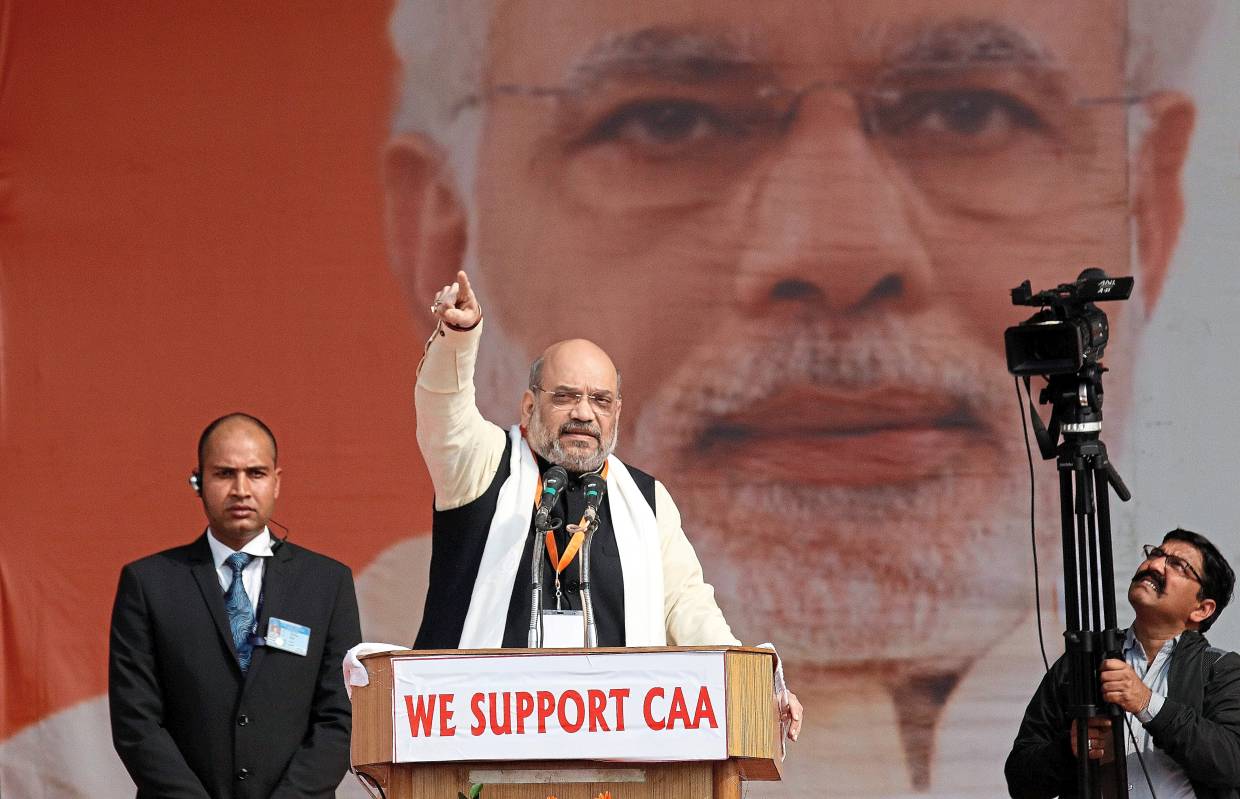 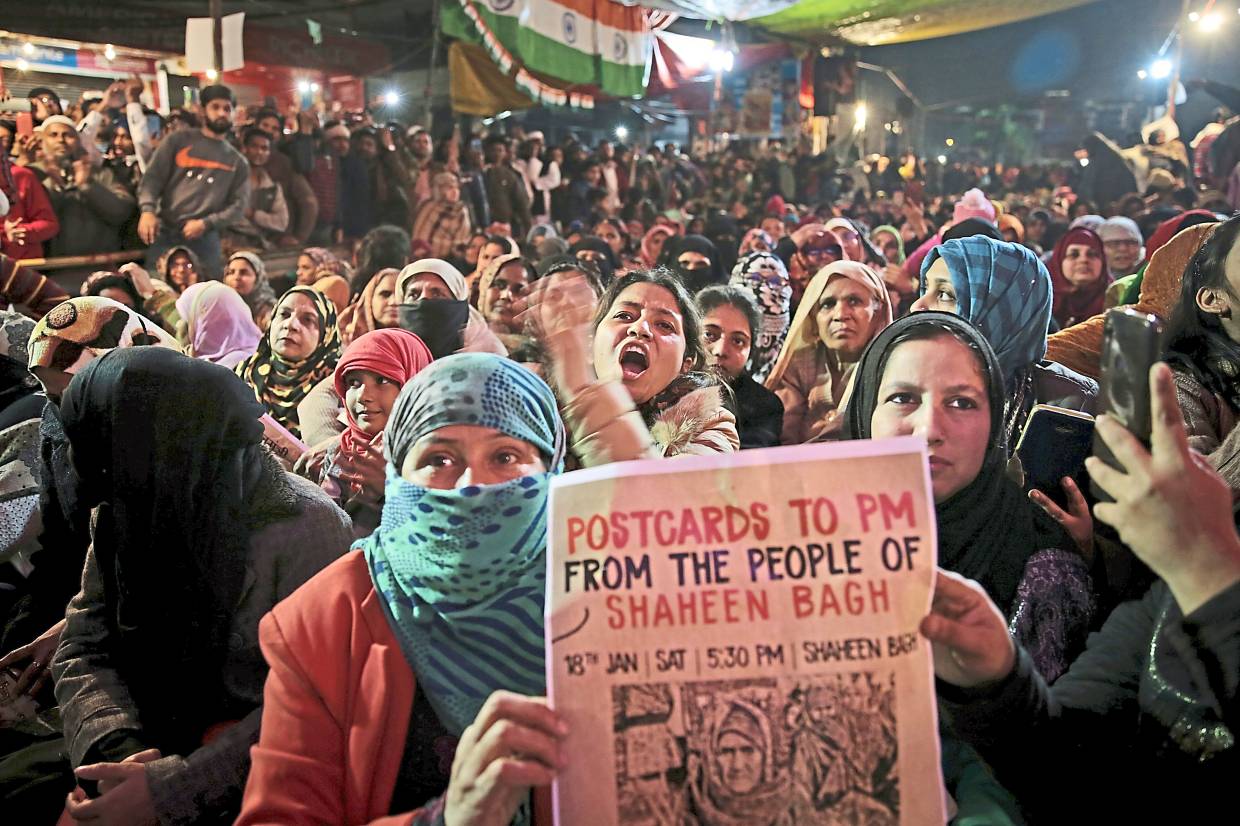 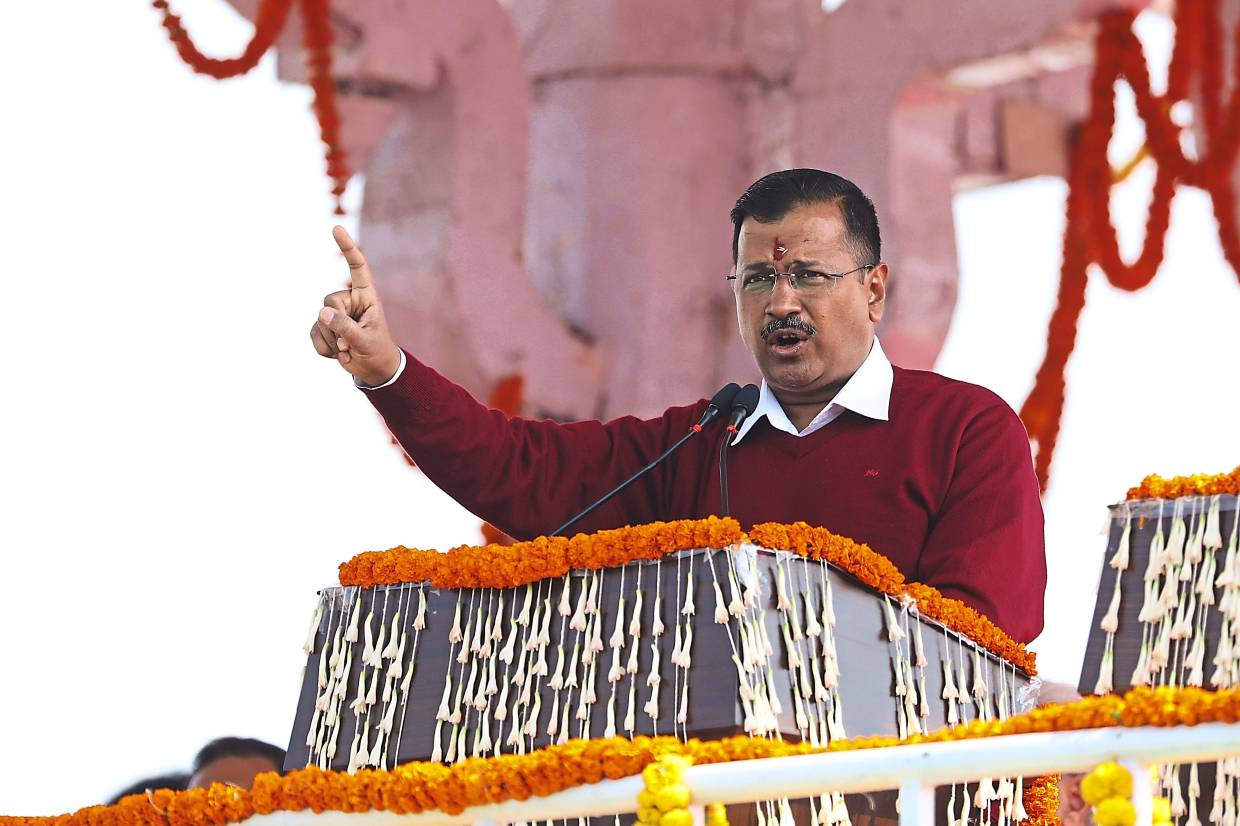 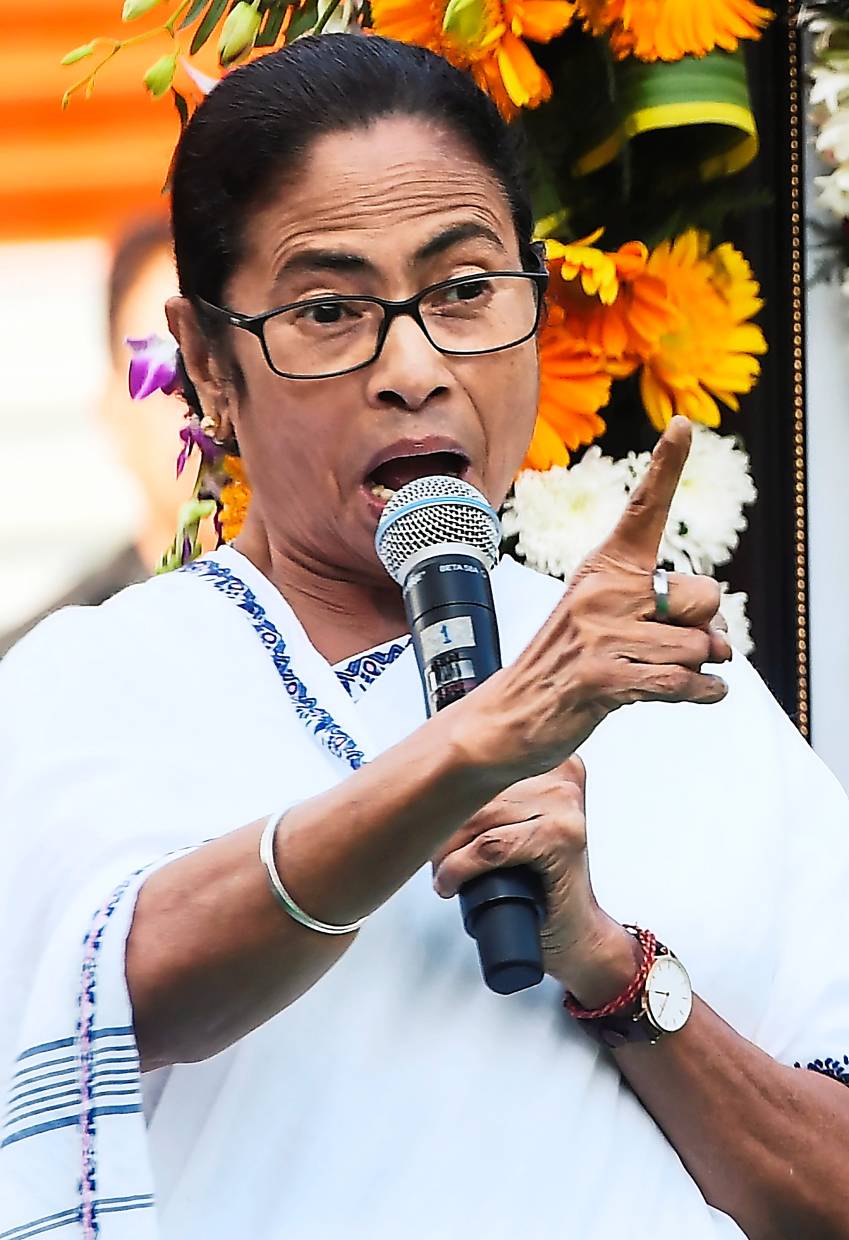 Voters waiting in queue to cast ballots at a polling station in Jafrabad, Delhi.

Supporters of Aam Aadmi Party looking on during a rally for the recent Delhi state elections in New Delhi. - AFP

Amit Shah addressing a rally in support of the new citizenship law in Lucknow. - Reuters