The amount of water being piped into the city has fallen to less than 10% of its original supply.

NEARLY four years ago, the south Indian city of Chennai (capital of Tamil Nadu) was under water. The worst floods in living history – the result of cyclones from the Bay of Bengal – had reduced this manufacturing and services powerhouse of eleven million to a standstill as brackish water lapped at the wheels of the planes parked at the Anna International Airport. The human tragedy was substantial, with over 500 deaths and some 1.8 million people displaced.

Today, the city is wracked by an unprecedented drought: the result of over 200 days without rain. Chennai’s four main reservoirs are now bone dry. The ancient lake of Chembarambakkam – a perennial source of water – is also fast disappearing.

However, for 28-year-old Anbu, a truck driver, the drought – the worst in over 140 years – has been a source of work. Nearly four years ago, Chennai was under water. The worst floods in history brought the city to a standstill. Today, it is wracked by an unprecedented drought. - Reuters

Ironically, at the time of the 2015 floods, he was forced to leave his village, Pavandhur, some 250 kilometres to the south of Chennai because it had – of all things – run out of water. Despite earning a diploma in ceramics, he had hoped to become a sugarcane farmer like his father, explaining: “When there is water, it is a crop that really gives back”.

But at a highway truck repair station in Poonamallee, on the outskirts of Chennai, Anbu is practically beaming as he pats his brightly-painted water truck. Given that his job as a driver is a 24-hour commitment, the vehicle also often doubles as his home.

When Team Ceritalah met him, hot dust-laden winds swept the yard which housed two other trucks loudly undergoing repairs. The oppressive heat made Anbu seem much older. And yet, this genial man and his colleagues might be all that are stopping thousands of Chennai’s inhabitants dying of thirst.

Anbu, in fact, drives past the Chembarambakkam lake daily, once the last holdout of water for the city. It used to boast a ring of prosperous fishing villages. Violence against water supply truckers has broken out; although it has never happened to Anbu, truck drivers are often attacked by villagers.

Chembarambakkam was constructed by the Chola kings some 900 years ago. They created an intricate hydrological system – of tanks, bunds and lakes – that contributed to the region’s wealth. Indeed, that was the basis of the Chola’s littoral and maritime empire. In the past decade however, these water resources have been severely tested as poor planning, corruption and incompetence have taken hold.

Haphazard growth and illegal construction (often atop the city’s natural lakes) has severely damaged the environment, as well as the subregion’s delicate coastal ecosystem of mangroves and waterways.

Quarrying near the lake bed and a failure to dredge has only worsened the situation. Furthermore, the amount of water being piped into the city has fallen to less than 10% of its original supply.

In its stead, three mega desalination plants are working overtime and the state government has been forced to transport water using trains from further inland. But these solutions – like the quarried water – are not sustainable.

Indeed, managing water resources is an ongoing challenge on the Subcontinent. The NITI Aayog, (the successor of India’s Planning Commission) estimates that 21 of the country’s cities will run out of groundwater by 2020. With the monsoon arriving much later and weaker than usual this year, cities across the country will be squeezed dry – literally. Little has been done towards an all-India water management strategy, although the situation in certain states like Andhra Pradesh is better than elsewhere. Indeed, canal and dam-building projects in neighbouring states, like Karnataka, have further depleted Tamil Nadu’s water supplies.

Chennai has almost ground to a halt with water prices skyrocketing. Anbu says that a 20-litre can of drinking water, which used to fetch INR25 (INR16.75=RM1) – 30 currently goes for INR80 – 100. This means that water is now more expensive that petrol in Chennai, which goes for INR76.18 a litre.

The automobile factories have temporarily shut down, with about 20,000 employees at risk of losing their salaries when they need them most. Many companies on Chennai’s IT corridor, which sustains another 20,000 jobs, have asked their employees to work from home. These offices were mostly served by trucks like Anbu’s but his prices have nearly doubled now.

Street vendors Team Ceritalah spoke to say their nights are now spent searching for water for their homes and businesses.

Another irony: the north and north-eastern states of Bihar and Assam respectively are currently being hit by severe flooding, resulting in scores of deaths. It’s a testament to how unpredictable India’s weather has gotten thanks to climate change – itself arguably a result of the country’s breakneck development. Job opportunity: For 28-year-old truck driver Anbu, the drought has been a source of work albeit with occupational hazards.

Back in Chennai though, the drought means more work for Anbu. Trucks like his collect water from villages around the city, traveling as far as 40 kilometres out.

They fill their 24,000-litre tanks by paying farmers for water from the latter’s wells or bores for as little as INR700. The same water is then sold in Chennai for over INR10,000.

Being just a driver, Anbu’s cut is small, just INR15,000 for 10 days work, but that’s still a pretty hefty sum in these parts.

However, there are occupational hazards, including farmers protesting that the trucks are “stealing” water from their villages.

Violence has sometimes broken out, although Anbu says: “Luckily it has never happened to me. But often, truck drivers are attacked by villagers, the glass of the trucks are shattered with stones and the tires are punctured.” 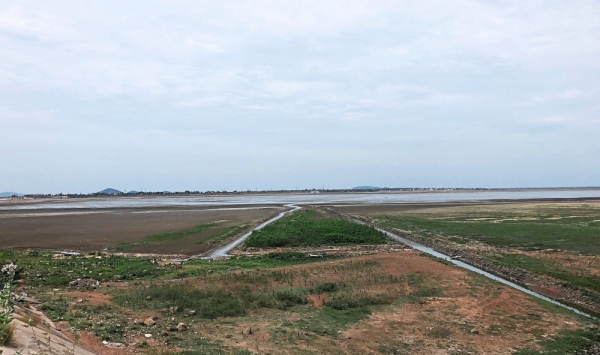 Many of his friends have had narrowly avoided confrontations with rural folk angry that the little water they have is being taken to serve Chennai’s city-dwellers, who in the past showed scant concern for the farmers’ plight.

When asked about whether he would allow trucks to draw water from his own village, Anbu smiles again: “I would never let a truck like mine even enter the perimeters of my village. I know what I am doing is wrong: but we are in a situation where you have to do what you can to survive. I am not apologising for that.”