Fiery issue: It is estimated that some two million protestors went to the streets to demonstrate last Sunday. — Photos by Clara*

“OUR freedom and our rights are fast-disappearing. This wasn’t like the ‘Occupy’ movement back in 2014. Back then, the general public weren’t so convinced. This time, it’s very different. Many people feel they have no choice; that they have to demonstrate in order to preserve our current way of life and our autonomy.”

Clara* (not her real name) is an activist.

Her voice is infused with all the enthusiasm and energy of a twenty-four-year-old university graduate.

Despite English not being her first language – she’s more at ease in Cantonese – she speaks with a fluency and passion that belies her age. Indeed, it’s as if a spigot is suddenly turned on, with the words gushing out of her. The people of Hong Kong - who have been protesting in the streets since March this year - are pressuring their Chief Executive Carrie Lam Cheng Yuet-ngor to scrap the Extradition Bill.

“We aren’t Mainlanders. We’re Hong Kongers.” For Clara, that’s a self-evident, undeniable truth: something that is final and non-negotiable.

However, for Beijing-based authorities, such views are an anathema. They regard the city-state as an integral part of China.

And yet, Clara sees proof of Hong Kong’s separateness everywhere.

“We are very civilised and disciplined. For example, even though we were protesting, we respected public order.”

According to Clara, last Sunday’s vast, two million-strong demonstration was driven by an existential fear that the special privileges enjoyed by the Hong Kong people (and enshrined in its Basic Law) were in danger of being taken away by the so-called Extradition Bill proposed by Carrie Lam Cheng Yuet-ngor, the territory’s Chief Executive. 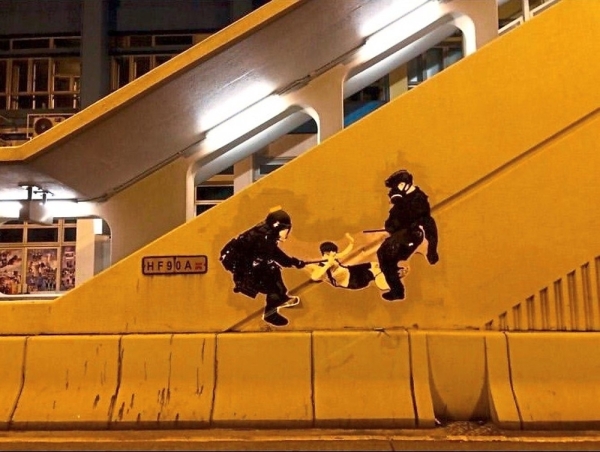 Street art portraying police violence were spotted in multiple locations around Hong Kong during the protest on the 12th of June.

The bill [formally dubbed the “Fugitive Offenders and Mutual Legal Assistance in Criminal Matters Legislation (Amendment) Bill 2019”] arguably not only sparked fears that it would facilitate political repression by the mainland government, but also revived deeply-rooted anxieties about the loss of hard-won democratic rights and indeed, the island’s unique identity.

“In 2014, we fought for rights that we were already supposed to have. These recent protests are more to uphold our original way of living. It has only been 22 years since the British left and they (the Chinese government) already want to take away our rights.”

Indeed, this seems to be a common feeling among the protestors.

How do we know? They’ve been discussing it.

Clara is part of a unique phenomenon – a movement that has no clearly identifiable leader, unlike the 2014 Occupy/Umbrella movement protests that seemed to be personified by Joshua Wong.

Instead, Hong Kong’s 2019’s protestors seem to be driven from the ground-up. Police personnel, all geared up with helmets, creating a human barricade at the entrance of the legislative building as a crowd of protestors began to grow at the compound.

It’s as if they’re part of a beehive, responding, as it were, to a predator’s intrusion.

Certainly, they’re always in contact with one another, connected via encrypted messaging apps like Telegram to foil the Chinese government’s reported mastery of digital surveillance.

So, what does this all mean for us in Southeast Asia?

For many years, people have thought that the city-state’s residents were apathetic and uninterested in politics. Well, Xi Jinping’s heavy-handedness (via his perceived proxy, Lam) has made them “care” and now they’re very much engaged. Flowers in honour of a protestor who lost his life after falling from a bridge as he attempted to hang a banner rejecting the bill before the start of last Sunday’s demonstration .

Many of the protestors feel that the limited freedoms Hong Kong enjoys is the only thing differentiating them from China’s other cities.

Take that away, and where does that leave Hong Kong?

Their willingness to stand up for their liberties and identity are a reminder to Southeast Asia’s leaders and people: these things are worth fighting for.

What could this mean for the rest of China’s 1.2 billion inhabitants? Well, they might seem pliable now. But don’t bank on them being so docile in the future, especially if they feel their leaders are taking them for granted.

Second, like it or not, Xi’s perceived invincibility has suffered a knock. It wasn’t so long ago that some were hailing him as “Emperor Xi.”

Is this a public humiliation or just a minor setback for the “paramount leader”? Only time will tell.

However, China’s travails in the ongoing trade war with the USA has further dented his reputation. Indeed, one must feel some degree of sympathy for him having to deal with the mendacious and thuggish American President, Donald Trump.

Unsurprisingly, a nascent internal opposition is allegedly coalescing around those who support the late Deng Xiaoping’s more guarded approach to geopolitics and diplomacy.

This should be a warning for China-boosters in our region: the so-called “Beijing Consensus” is not infallible or without its pitfalls.

It is certainly not our destiny.

Third and finally, Xi Jinping will need to show that he’s not a spent force. As such, I hope that the Hong Kong demonstrators are ready to show China some “face.”

Should they choose to be inflexible with their demands, the end result could well be PLA hardware on Nathan Road.

The PRC has fixed interests. These will not be compromised.

What happens next; whether the 2019 protests will mark a new era for Hong Kong and China, or end in another Tiananmen Square-style tragedy, is very much up to both sides.

The zeal and idealism of young Hong Kongers like Clara who took to the streets must also be augmented with realism and pragmatism.

The indefinite postponement of the Extradition Bill means they have arguably “won” their first “battle”. Winning peace with dignity for their beloved home island will require wisdom and tact.

For China’s leaders, the protests are a challenge—but also an opportunity.

It’s a chance to show not only the people of Hong Kong and the Mainland—but also the world, particularly Southeast Asia—that they have more in their arsenal than just hardball tactics.

That talk about China’s “peaceful rise” is more than just deceptive rhetoric.

Does either group have the imagination and flexibility?

Cooler heads must prevail on both sides. We certainly hope and pray that they do.

The views expressed in this article do not necessarily reflect the views of Sunday Star.