IT has been one hot mess in PKR, with bullets flying in all directions following the stunning arrest of Farhash Wafa Salvador Rizal Mubarak (pic) in connection to the sex video scandal.

Farhash’s arrest sent shockwaves through PKR because, as the political secretary to Datuk Seri Anwar Ibrahim, any involvement he may have in the video conspiracy will have grave repercussions for the prime minister-in-waiting.

Unless Farhash, perceived as the mastermind figure, can quickly clear his name, many will be tempted to link this sordid issue to the office of the PKR president where Farhash is said to be based.

The video issue had blown hot and cold for weeks, but there has been lots of finger-pointing following the police remand of a total of nine persons, including Farhash and several PKR politicians, for questioning.

The matter has reached a new level of urgency and intensity and nobody, including those close to the powers-that-be, are able to predict where it is heading in the coming days.

Anwar had been very diplomatic about the issue, but he is obviously upset over the arrest of his political secretary.

He can see what this might lead to and he has upped the ante, suggesting for the first time that Datuk Seri Azmin Ali, one of the men implicated in the video, should resign if the video is found to be authentic.

The president’s men are also hitting out.

His party information chief Datuk Seri Shamsul Iskandar had asked Azmin to go on leave pending the outcome of the police investigations.

Azmin, who had called for Dr Mahathir to stay on indefinitely as prime minister, retaliated by calling Shamsul a hypocrite.

It was quite sad because Shamsul had once been closely aligned to Azmin.

Dr Mahathir remains unshaken in his belief that this is a conspiracy to “stop somebody from succeeding in politics” as he puts it.

Like many people, he does not buy the story that Haziq Abdullah Abdul Aziz had acted alone.

He sees the video scandal as a big political theatre that is beyond the actions of a single person.

However, his opinion that it was up to Azmin whether to take leave was seen as a shift from his earlier stand that there was no need for Azmin to go on leave and it caused political ripples.

“Farhash’s arrest has cast aspersions on his boss, but I hope Anwar is not involved.

“We need to know the truth because Anwar was also the victim of this kind of conspiracy to destroy him,” said Seberang Jaya assemblyman Dr Afif Bahardin, who is an Azmin loyalist.

Yesterday morning, a montage of six PKR politicians and leaders allegedly involved in the conspiracy barrelled its way through cyberspace.

They were labelled as “Team Sucasa Jalan Ampang” because it was alleged that the Sucasa condo in Jalan Ampang was where the plotting took place and where Haziq’s confession was filmed.

Four of those in the montage are now in police custody, another two are still out there.

Meanwhile, the Institut Darul Ehsan think tank that is linked to the Selangor government has turned up the heat by releasing a survey indicating that 75% of Malaysians do not want to see Dr Mahathir stay on as prime minister beyond two years.

Think tank chief Prof Datuk Dr Redzuan Othman said that of this group, 44% want Dr Mahathir to go within the next six months while 20% say he should go immediately.

Such surveys are informative, but it is only going to annoy Dr Mahathir and make him dig in his heels.

The video scandal has exposed the underlying suspicions and distrust that both sides have for each other.

“Your guess is as good as mine. I really don’t know how this thing will end,” said PKR politician Lee Chin Cheh.

What is clear is that PKR is being dragged through the mud and the party has lost the moral high ground that it used to command.

There are also signs that the succession issue, that had seemed on course, may be about to turn contentious.

At the same time, it is quite apparent that the police are done with establishing whether the video is authentic or a deepfake even though they have been extremely tight-lipped.

There is danger everywhere for both Anwar and Azmin because the outcome of the police investigations will determine their political future.

The stakes are higher for Anwar because it may determine whether he will be the next prime minister or the prime minister-in-waiting forever.

Joceline Tan was an associate editor of The Star and continues to contribute political ana­lyses. The views expressed in this article do not necessarily reflect the views of The Star. 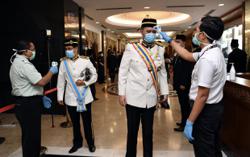 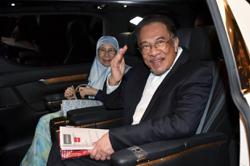 Anwar to have audience with King today 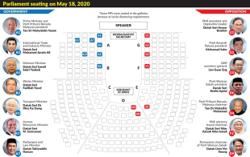