We hunger for better leadership, better democracy, and most of all, we hunger for a better Malaysia.

Malaysian politics over the last few years has become like a group of different restaurants competing relentlessly with one another for customers.

Over time, the restaurants have put in more time, effort and energy into insulting and badmouthing one another than they have into the quality of their food – which has become little more than a messy mix of stale and expired ingredients deep-fried in way too much oil.

As a result, the rest of us are basically left with a choice between bad food and worse food.

Bit by bit, Malaysians are agreeing that it’s finally time for new eating establishments. All that remains is to see who will open them and whether Malaysians will find their new menus palatable.

There is a school of thought that says it’s a waste of time trying to achieve the perfect menu; all you need to do instead is to be first to market.

Even if your product is not the best, there are times being first to market is sufficient to put you in pole position, which can then translate into long-term market leadership.

Is this one of those times?

Will rushing to be first to market result in a successful restaurant? Or will it result in “instant noodle politics”?

As a kid, I loved instant noodles. It was the most delicious thing in the world. It contains enough artificial flavouring to be palatable and it is literally one of the fastest hot meals you can make in the world.

But everyone knows: It’s not good for you.

For much more delicious, healthy noodles, I recommend this charming little restaurant in Taman Tun Dr Ismail in Kuala Lumpur where the speciality are air-fried wontons and charcoal noodles.

They have inspirational quotes on a little blackboard outside the door, a recent one being: “Direction is more important than speed; many are going nowhere fast.”

Getting the direction right is, of course, no easy task.

I think of all the Malaysians eager to contribute something positive to Malaysia as good cooks and chefs.

Trying to squeeze them all into something like a new political party is akin to trying to squeeze specialists in pork-based, beef-based, vegetarian, vegan, raw, palaeolithic, keto, and goodness knows how many other types of cuisines into one restaurant.

The vegetarian chef may not be comfortable working around all the meat and the Muslim chef may immediately pull out if he learns there will be pork served.

Maybe what Malaysia needs is not another restaurant, but a food court. One where chefs and cooks from all backgrounds might feel comfortable coming together and being part of something bigger than themselves while maintaining their own identities and staying within their engagement comfort zones.

A food court has some degree of central management, but it does not micromanage each and every stall and dictate the A to Z of their operations. Similarly, the right kind of movement should provide for a wide range of ways that Malaysians want to contribute.

Focusing on a “political party” off the bat is likely to alienate too many people too early on.

What Malaysia needs now are leaders who know how to create a food court that will attract all the right chefs and provide an ecosystem in which all will mutually thrive.

Much like a food court will need certain ground rules and common standards, a movement for Malaysia will need a set of core principles and shared values which people buy in to.

It’s not hard to gather five famous, like-minded stall owners to start a food court and launch based on hype. People will definitely be intrigued and there will no doubt be some waves created.

If only these five stall owners decide the direction of the food court, however, while expecting the next 25 stall owners to buy in wholesale to that direction, they may have another thing coming.

It’s hard to overstate the value of making people feel heard and included or the likelihood that failure to do so will result in squabbling and fragmentation.

If this “five first” approach is like making instant noodles, then going through the painstaking, slow, and often excruciating process of talking to all 30 stall owners to build consensus before launching the food court is a bit more like marinating a dish for 24 hours before starting another six-hour cooking process (analogy inception). The quality of the end product is similarly comparable.

In our work with Projek Wawasan Rakyat (POWR), we’ve come to learn just how many cups of shared coffee it takes to build the relationships, connections, and mutual understanding necessary to be a strong foundation of a grand coalition (spoiler: the answer is many, many cups).

Failing to take the time to build this properly will result in exactly the type of coalition that Pakatan Harapan was – one with no genuine foundation, and one likely to meet the same fate in the end.

In building a new food court, it’s probably wise to avoid political arms dealers who profited from the old restaurant wars by selling to both sides and who promise you big flashy numbers and quick results.

Flashy restaurants that sell mostly ambience and novelty are soon closed down when their novelty wears off. Their owners then just move on to create the next gimmick, using the same contractors.

The restau-rants that focus on the quality of food, how-ever, tend to endure over decades. I’m sure most Malaysians know a restaurant or stall where it’s been the same uncle or aunty cooking the same food since we were kids. Places like this survive only because they get the fundamentals right.

It is no doubt a leap of faith, but I believe that the right set of shared values and principles – built together slowly – will matter more in the long run than any number of likes, retweets or shares in the short run.

For the record, I too believe that part of the movement will at some point down the road involve contesting elections (though one should not be locked into doing so strictly by GE15).

I believe there’s a way to do this, however, without committing fully to a traditional political party route at this juncture. There’s obviously no space here to go into the details today, but this is something some of us have been reflecting and working on for about a year now.

What we need here and now, though, is a platform that has the best long term potential to unite the widest range of Malaysians possible, in a way that is clearly focused not on personal ego, partisanship, and the instant noodles pursuit of power; but on nation-building, common ground, and national unity for the long term.

I know we’re all starving but rushing to fill our stomachs with empty carbs is not the answer.

If we genuinely, truly wish to avoid the mistakes of the past, then we should take all the time we really need to get our recipes and our formulas right. Good food takes time to grow, to prepare, and to cook.

Nathaniel Tan sometimes feels like an old uncle eating Maggi Mee by the roadside while yelling at kids for driving too fast. He can be reached at nat@engage.my. The views expressed here are solely his own. 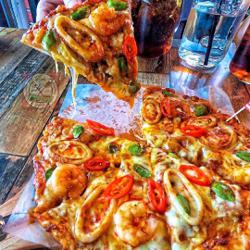