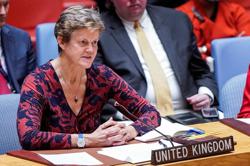 A Russian drone is seen during a Russian drone strike, which local authorities consider to be Iranian made unmanned aerial vehicles (UAVs) Shahed-136, amid Russia's attack on Ukraine, in Kyiv, Ukraine October 17, 2022. REUTERS/Roman Petushkov

Russia argues that there is no mandate for Guterres to send U.N. experts to Ukraine to investigate the origin of the drones. Iran denies supplying the drones to Moscow, and Russia has denied its forces used Iranian drones to attack Ukraine.

In the nine-month-old conflict, Ukraine has accused Russia of using drones - or unmanned aerial vehicles (UAVs) - to hit energy infrastructure and other targets.

Britain, Germany and France all wrote to Guterres this week asking for an update on plans to send U.N. experts to Ukraine, according to letters seen by Reuters. Russia also wrote twice to Guterres in response, accusing the trio of violating the U.N. Charter by trying to exert influence over the U.N. chief.

When asked whether a visit by U.N. experts to Ukraine was planned, U.N. spokesman Stephane Dujarric declined to comment.

Under the 2015 U.N. resolution, a conventional arms embargo on Iran was in place until October 2020.

But Ukraine and Western powers argue that the resolution still includes restrictions on missiles and related technologies until October 2023 and can encompass the export and purchase of advanced military systems such as drones.

Guterres said in the latest report that the transfer of drones or ballistic missiles - with a range of more than 186 miles (300km) - from Iran to another country would require prior approval from the U.N. Security Council.

A senior U.N. diplomat, speaking on condition of anonymity, also told Reuters this week that Iran planned to send hundreds of drones and ballistic missiles to Russia.

"They're clearly on the order books," the diplomat said. "The biggest question is what Iran gets in return. It clearly isn't going to be weapons because Russia needs to suck all the weapons in. It probably isn't cash."

"It probably is significantly increased depth of defense cooperation with massive implications for the security of the region. So we are very concerned about that," said the diplomat.

The United States said on Wednesday that it has seen the continued provision of Iranian drones to Russia, but that Washington had not seen evidence that Iran has transferred ballistic missiles to Russia for use against Ukraine. 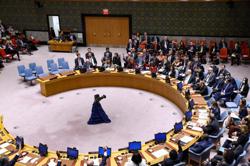