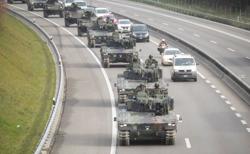 (Reuters) - The fate of Slovakia's minority government hung in the balance on Thursday as opposition parties launched a no-confidence motion and the cabinet scrambled to win support for its budget and planned windfall taxes on the energy sector.

Opposition groups have accused Prime Minister Eduard Heger's government of not doing enough to help people cope with soaring energy costs. The debate on their motion is set to start on Thursday afternoon with the final vote expected early next week.

Analysts have said any change in government could affect the EU member's support for neighbouring Ukraine, particularly if there is a victory for the leftist opposition which has said it is opposed to providing Kyiv with military equipment.

The government, in power since 2020, lost its majority in September when a junior coalition partner, the libertarian SaS party, left after clashes with the main ruling Ordinary People (OLANO) party, mainly over the handling of the energy crisis.

A government collapse could lead to a period of stagnation if Heger stays in office with limited powers while he or somebody from the opposition tries to form a new coalition.

President Zuzana Caputova could also form a new cabinet, and parties could seek an early election - though they would need to get 90 votes in the 150-seat parliament to do so.

The no-confidence motion, called by the SaS party and the Hlas party of former Prime Minister Peter Pellegrini, could be close as the opposition controls around 70 votes and still needs six more from various independents to succeed.

Only one of those has clearly said he will vote against the government.

"It's very open, because some of the opposition lawmakers, who have supported the government so far, are ambiguous, while the ruling coalition doesn't have a majority," Radoslav Stefancik, a political analyst at Slovakia's University of Economics, said.

"It's possible that the proposal has a real chance, but only as long as all the other opposition lawmakers also vote for the fall of the government."

Parliament is due to hold a final vote on the 2023 state budget on Friday. Failure to approve it by the year's end would force the government into a provisional budget that could water down its support for people suffering from high energy bills.

Lawmakers are also due to vote shortly on windfall taxes on the country's main refinery and gas transit firms to support budget revenue.

Local media reports said a compromise could be found under which some of the independents support both the government and its budget if the coalition agrees to an early election by next September. The next election is currently scheduled for February 2024.

(Reporting by Robert Muller in Prague; Editing by Andrew Heavens)