Dutch King orders investigation into the royals' colonial past AMSTERDAM (Reuters) - Dutch King Willem-Alexander has commissioned an independent research into the role of the royal family in the colonial past of the Netherlands, the Dutch government's information service (RVD) said on Tuesday.

Three Dutch historians and a human rights expert will carry out the investigation, which is set to take three years and will span the period from the late 16th century until the "post-colonial" present, the RVD said, without elaborating on the details.

"Profound knowledge of the past is essential to understand historical facts and developments and to see their impact on human beings and communities as clearly and honestly as possible," the king said in a statement.

The announcement follows the recommendation last year by an advisory panel that the government acknowledge that the 17th-19th century transatlantic slave trade amounted to crimes against humanity.

The Dutch central bank earlier this year apologised for its role in the slave trade and said it would fund projects to raise awareness of slavery and to mitigate the effects it still has on people.

The Dutch played a major role in the global slave trade from the 17th century until the Netherlands abolished slavery late in the 19th century.

With the commemoration of the 150th anniversary of abolition next year, Surinamese advocacy groups and others are reinforcing their calls for reparations for the descendants of enslaved people.

The Dutch West India Company operated ships estimated to have trafficked some 600,000 people into slavery for centuries, according to Dutch state data. Enslaved people were violently forced to work under harsh and dehumanising conditions on plantations in Dutch overseas colonies in the Caribbean and South America.

In April, Dutch bank ABN Amro apologised for the similar involvement of its legal predecessors in the slave trade, plantation slavery and the trade in products that originated in slavery. 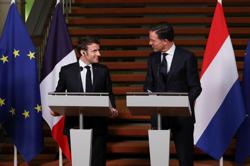