Last week, Ukraine said a series of "bloody packages" were sent to its missions across Europe, soon after a letter bomb detonated at Ukraine's embassy in Spain and police defused others sent to, among others, Prime Minister Pedro Sanchez.

The postal service's security staff detected the new envelopes during screening on Monday morning and alerted police, the sources said. Officers found no explosive or flammable substances inside, the sources added.

Ukrainian embassy in Madrid had already received a package with animal eyes on Friday that the interior ministry said carried a foreign stamp.

Evidence from that package shared with the postal service helped its staff detect the latest one, police sources added.

On Saturday, a source familiar with the investigation told Reuters the six letter bombs appeared to have been posted from the northern city of Valladolid.

Ukrainian Foreign Ministry spokesperson Oleg Nikolenko confirmed the latest interceptions on Monday and said there were now 21 known cases in which such threats had been sent to diplomatic missions in 12 countries.

(Reporting by David Latona in Madrid and Tom Balmforth in Kyiv; Editing by Andrei Khalip and Andrew Heavens) 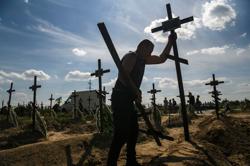