YAOUNDE, Dec. 5 (Xinhua) -- Cameroon's parliament on Monday approved a budget of 6,345.1 billion xaf (about 10 billion U.S. dollars) for the 2023 financial year, representing an increase of 4.4 percent compared to the previous financial year.

Edgard Ndongo Eteme, General Rapporteur of the Committee on Finance and the Budget, while presenting the budget said the money will be used to implement the country's development plan, support national security and health system and rehabilitate displaced citizens.

"The new budget also seeks to create jobs, boost exports and economic stabilization measures and mobilize revenue," said Louis Paul Motaze, Minister of Finance who defended the budget on behalf of the government.

Cameroon projects an economic growth rate of 4.2 percent in 2023 compared to a forecasted growth of 3.7 percent in 2022, said Motaze. 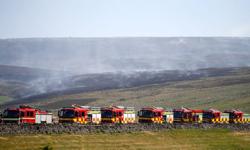 When judge ordered US woman to post the truth about a fatal wreck, Facebook was not kind
Human Rights Watch urges Ukraine to investigate antipersonnel mine use
Dog trapped in burning vehicle now safe, thanks to quick-thinking US Amazon driver
Vrbo is trying to crack down on Super Bowl parties in rentals
Pakistan mosque bombing death toll rises to 87
Factbox-New Zealand's new Prime Minister Chris Hipkins
Self-driving semis focus of California rules, legislation
Is there life on Mars? Maybe, and it could have dropped its teddy
Hunt for missing Australia radioactive capsule steps up as nuclear body joins search
Opinion: How to safely use payment apps