It added that chemotherapy had been suspended and that he is receiving care for terminally ill patients aimed at alleviating pain and breathlessness.

The Albert Einstein hospital in Sao Paulo declined to comment, saying that it would only communicate through official medical bulletins.

On Friday, it said Pele had been admitted to the hospital with a respiratory infection, for which he was receiving antibiotics.

In a message posted on social media on Thursday, Pele said he was making a "monthly visit" to hospital as part of his cancer treatment.

Widely regarded as one of the best footballers of all time, Pele is the only player to win the World Cup three times, lifting the trophy in 1958, 1962 and 1970.

In recent years, he has faced a series of health issues, including problems related to his spine, hip, knee and kidneys. Last year, the former Santos and New York Cosmos star underwent surgery to remove a tumor in his colon. 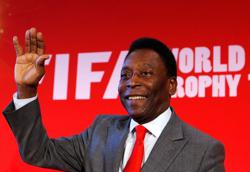