PESHAWAR (Reuters) - The Pakistani Taliban on Saturday claimed responsibility for a gun ambush that killed three police officers in northern Pakistan, the second attack claimed by the group just days after it announced an end to a ceasefire with the government.

He said three police officers were killed on the spot and the identity of the attackers was unknown.

The militant group Tehreek-e-Taliban Pakistan (TTP) claimed responsibility for the attack in a statement.

On Monday the TTP announced an end to a months-long ceasefire, claiming a suicide attack in the southern Pakistani city of Quetta two days later, which killed four people and wounded more than 30.

The TTP wants to overthrow Pakistan's government to replace it with a governance system that subscribes to their own harsh interpretation of Islamic laws.

The Afghan Taliban have been facilitating peace talks between local militants and the government since late last year.

The Pakistan army has conducted several operations against the militants in their strongholds in lawless districts along Afghan border in recent months.

(Reporting by Jibran Ahmad in Peshawar; Writing by Charlotte Greenfield in Kabul; Editing by Ros Russell) 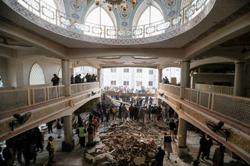