LOS ANGELES, Dec. 2 (Xinhua) -- New Omicron subvariants BQ.1 and BQ.1.1 accounted for over 60 percent of new COVID-19 cases in the United States in the latest week, according to estimates released Friday by the U.S. Centers for Disease Control and Prevention (CDC).

The two variants are descendants of Omicron's BA.5 subvariant. They have replaced BA.5 to be dominant strains in the United States.

The BA.5 accounted for 13.8 percent of new infections in the latest week, CDC data showed.

The CDC is also tracking another new COVID-19 variant of concern known as XBB, which has grown to make up an estimated 5.5 percent of new infections nationwide.

According to the World Health Organization, XBB does not appear to be more severe than other Omicron subvariants, but there is early evidence that XBB poses a higher reinfection risk compared to the other sublineages. 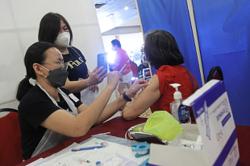