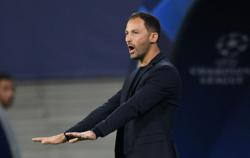 The 2018 runners-up, led by former Ballon d'Or winner Luka Modric, progressed as the second-placed team in Group F behind African side Morocco, who beat Canada 2-1 on Thursday.

Roberto Martinez announced right after the defeat that he would step down as Belgium head coach after a six-year spell in charge.

"This was my last game with the national team, I can't carry on," Martinez said at his post-match press conference. "It's the time for me to accept that this is the last game."

The Spaniard said he was always planning to leave after the World Cup.

"That was the end, whatever would happen, whether we were world champions, whether we went out in the group stage," the 49-year-old said.

Belgium went into the match needing a victory to power them into the knockout stage while Croatia could secure a round-of-16 berth if they avoid a defeat.

Martinez dropped captain Eden Hazard to the bench as one of four changes, which also saw Leandro Trossard and Dries Mertens start for the first time in Qatar.

Croatia almost took the lead only 10 seconds after the opening whistle, as the ball was played forward to Ivan Perisic after kick-off and the Tottenham forward cut inside and drilled a shot just wide of the far post.

Zlatko Dalic's side were initially given a penalty in the 18th minute after Yannick Carrasco tripped Andrej Kramaric in the box, but the decision was overturned following a VAR check which found that Dejan Lovren was offside before the foul.

After a goalless first half which saw Croatia seemingly more aggressive on the pitch, Lukaku, Belgium's all-time leading scorer, came off the bench to replace Mertens in the second half.

The 29-year-old striker could have put his team in front in the 60th minute when he got the ball in front of an almost empty net, only to have a shot ring off the inside of the post.

The Inter Milan forward came close again two minutes later, but his header went a little higher over the bar.

"They had some chances against us but it didn't change our mindset," said Dalic. "We were lucky that they didn't take their chances."

In the 87th minute, Thomas Meunier latched onto a loose ball in the Croatia box and steered it towards the goal. It traveled towards Lukaku, who sticked out a boot but sent his effort just past the right post.

The last chance appeared in stoppage time, when Thorgan Hazard clipped a cross into the middle of the box which Lovren failed to clear. But Lukaku misjudged the flight of the ball as it hit him in the chest and he didn't finish a strike.

"Today if we would've gone through, I think we would've seen a real Belgium and we could've been very competitive in the next rounds," Martinez said.

The Belgians had 15 attempts at goal, four more than their opponents, but no one produced a goal. The world No. 2 team managed just one goal in the tournament in their opening 1-0 win over Canada, and then missed the target again and again in the next two matches.

"The disappointment was against Morocco. Today we were ourselves, we played a very good opposition... The first two games we weren't ourselves," Martinez added.