DOHA, Nov. 28 (Xinhua) -- Casemiro struck late as Brazil secured a berth in the World Cup knockout phase with a 1-0 win over Switzerland in their Group G match here on Monday.

The Manchester United midfielder put the five-time world champions ahead in the 83rd minute when his first-time shot deflected in off Manuel Akanji following Rodrygo's flicked pass.

Brazil have now won their past nine matches and will progress to the last 16 of football's showpiece tournament irrespective of the result of their final group game against Cameroon on Friday. Switzerland must defeat Serbia to guarantee their place in the next round in Qatar.

Tite's men have not been beaten in their past 17 outings dating back to the 2021 Copa America final, which they lost to Argentina.

Brazil went into Monday's duel at Stadium 974 in Doha without talismanic forward Neymar, who suffered an ankle injury in a 2-0 victory over Serbia last Thursday.

The Paris Saint-Germain player was replaced by Manchester United midfielder Fred, who slotted into a central midfield position, allowing Lucas Paqueta to fill the void left by Neymar between the midfield and Brazil's front three.

Brazil began brightly and went close to scoring in the 12th minute when Paqueta's superb one-touch pass released Richarlison, whose cross for Vinicius Junior was expertly cleared by Nico Elvedi.

Paqueta troubled Switzerland's defense with his quick passing and clever runs. The West Ham playmaker combined with Richarlison again with a low cross from the left but the Tottenham forward just failed to make contact with his right foot at the near post.

Brazil's best chance of the first half came in the 27th minute when Raphinha floated a cross over Switzerland's defense to the overlapping Vinicius. The Real Madrid forward timed his run to perfection at the back post but could only manage to shank his effort over the bar.

Raphinha then sent a long-range attempt straight at goalkeeper Yann Sommer after a quick exchange with Militao.

Switzerland rarely advanced into the final third but they forced Brazil's defense into action in the 39th minute when Ruben Vargas turned Marquinhos inside out before being dispossessed by Thiago Silva.

The European side emerged from the halftime break with renewed purpose. Djibril Sow and Edimilson Fernandes had shots blocked by Militao and Alex Sandro, respectively, after smart play by Rieder on the right flank.

Brazil, too, sought a more direct route to goal and Richarlison just failed to make contact at the far post after Vinicius' cross with the outside of his boot.

Vinicius appeared to put Brazil ahead in the 64th minute as he skipped past Elvedi and coolly slotted a shot into the bottom corner. But the goal was disallowed after VAR ruled that Richarlison was offside in the buildup.

Casemiro finally made the breakthrough for Brazil in the 83rd minute. Vinicius's cross from the left was flicked on by Rodrygo, allowing Casemiro to drill a shot into the far corner via Akanji's backside.

Rodrygo almost doubled the lead four minutes later but his powerful effort was tipped over the bar by Sommer. The Real Madrid attacker had another chance to score in stoppage time as he found himself in space with only Sommer to beat, but the 21-year-old hesitated for an instant and saw his attempt blocked by Akanji. 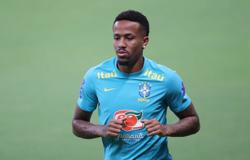