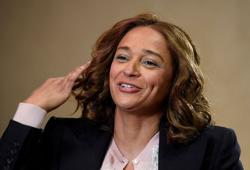 According to Lusa, citing an official document, the INTERPOL warrant was issued after Angola's public prosecutors requested the agency to "locate, arrest" and extradite dos Santos.

INTERPOL and the public prosecutors did not immediately reply to Reuters' requests for comment.

She has faced corruption accusations for years, including allegations by Angola in 2020 that she and her husband had steered $1 billion in state funds to companies in which they held stakes during her father's presidency, including oil giant Sonangol.

She has repeatedly denied any wrongdoing.

According to Lusa, the arrest warrant mentions the businesswoman is often in Portugal, the United Kingdom and the United Arab Emirates.