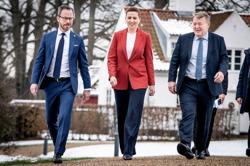 COPENHAGEN (Reuters) -Danes went the polls on Tuesday with Prime Minister Mette Frederiksen hoping for a vote of confidence in her handling of the pandemic and for her leadership to overcome soaring inflation and geopolitical insecurity.

The election has turned into a battle for centrist voters, with former prime minister Lars Lokke Rasmussen likely to become a king-maker with his new party, the Moderates, as neither the ruling left nor the right-wing opposition looks set to win a majority.

The vote comes as high energy prices and the highest inflation in four decades eat into household economies, and only a month after the sabotage of two pipelines carrying gas from Russia to Germany through Danish waters fuelled an unprecedented sense of insecurity among Danes.

Polls indicate that Frederiksen, 44, and her Social Democratic Party will gain slightly to again become the biggest party in parliament.

It is however far from certain that she will be able to stay in power. A poll published late on Monday by Gallup for daily Berlingske showed that 24% of voters had not yet decided who to back.

Frederiksen, who became Denmark's youngest-ever prime minister in 2019, is seeking to form a broad coalition across the traditional left-right divide, arguing that political unity is needed at a time of international uncertainty.

After a trailblazing election campaign, polls now indicate that Rasmussen and his Moderates, founded only four months ago, stand to become the third biggest party in parliament, behind the Social Democrats and his former party, the Liberals.

Rasmussen backs the idea of a broad government, but has stubbornly declined to say whom he would choose to lead a new government.

Although Rasmussen has not formally announced his candidacy to become prime minister, polls indicate voters would prefer him over right-wing candidates Jakob Ellemann-Jensen of the Liberal Party and Soren Pape Poulsen of the Conservatives.

Frederiksen was widely applauded for steering Denmark safely through the COVID pandemic, but her tenure was stained by a controversial decision to cull the country's entire mink herd in late 2020 over fears that they could spread a mutated variant of the coronavirus.

The order turned out to be illegal, resulting in the exit of a minister and a parliamentary probe. While Frederiksen avoided any legal consequences, it did result in fading support for her party and it shortened her tenure after a threat of a no-confidence vote forced her to call an early election.

The mink affair has also fuelled criticism from opposition lawmakers of Frederiksen seeking to centre power around herself and her office.

Frederiksen is under pressure to come up with solutions to the highest inflation in decades. So far, the government has been careful to use its favourite tools during the pandemic - massive aid packages and looser fiscal policy to stimulate the economy.

Tight spending leaves little room to provide assistance or to improve health care and other welfare services, a key topic in the campaign. Other key voter issues are the cost of living and climate change.

The right-wing opposition is worried that generous economic policies of a left-leaning government will stoke inflation and herald an economic crisis similar to the late-1970s and early 1980s, when the country was led by the Social Democrats.

The latest poll by Voxmeter indicates a 49%-41% lead for the left-leaning block over the right-leaning block, with the Moderates polling at 10% of votes.

Public broadcasters DR and TV2 will give initial estimates of the results later in the evening, with a reliable, preliminary outcome due to be announced between midnight and 2 a.m. Wednesday morning. 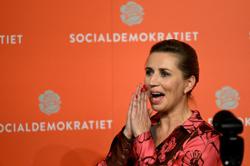 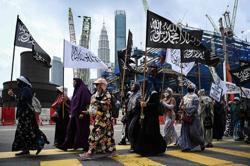