DUBLIN (Reuters) - A number of people were being treated in hospital in the Irish county of Donegal on Friday following an explosion at a service station, medical officials said.

The explosion happened at the Applegreen service station on the outskirts of the village of Creeslough, which is around 25 kilometres (16 miles) from the town of Letterkeny.

Photographs from the scene showed a large hole and collapsed roof in a residential unit above the service station’s store, with debris scattered across the forecourt where a number of cars were parked.

Letterkenny University Hospital said it had moved to major emergency standby and was dealing with a number of injured people following the incident.

The Irish Coast Guard said its nearby helicopter was assisting emergency services at the scene, and the National Ambulance Service said a number of ambulances were attending the incident. 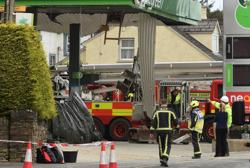