Children play on a damaged pedestrian bridge ahead of the general elections after five years of political instability, at a township outside the capital Maseru in Lesotho, October 6, 2022.REUTERS/Siphiwe Sibeko

MASERU (Reuters) - Lesotho citizens were due to vote in an election on Friday, after years of political instability that the southern African mountain kingdom's lawmakers have yet to resolve.

The election will go ahead despite a deadlock in parliament on a whole gamut of major constitutional reforms that were meant to be enacted ahead of the vote so as to bring order to Lesotho's fractious politics.

The All Basotho Convention (ABC) has run the country, with a population of 2.14 million, since 2017, but divisions within the party have given it two prime ministers over five years.

"These elections will be highly contested and by the look of things the DC and RFP will be neck-and-neck," said Lesotho political analyst Lefu Thaela. He added that DC are likely to get the most votes but if they don't win an outright majority, the outgoing ABC will find themselves kingmakers.

In 2020, ABC leader Thomas Thabane stepped down as prime minister after being charged with the murder of his ex-wife. He denied any wrongdoing, and the charges were later dropped.

His successor - Prime Minister Moeketsi Majoro - declared a state of emergency in August, after legislators failed to pass constitutional reforms to amend everything from the role of political parties, rules over floor-crossing in parliament, to the appointment of senior officials and the PM's role.

The reforms were meant to make Lesotho less prone to political logjams, but got stuck in one themselves.

Lesotho has seen four military coups since independence from Britain in 1966.

Opposition riots in the capital Maseru in 1998 prompted South Africa to deploy troops to restore order.

In 2014, the then prime minister Thabane temporarily fled the country, accusing the military of overthrowing him, which forced South Africa to mediate to restore order and allow his return. 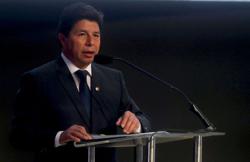