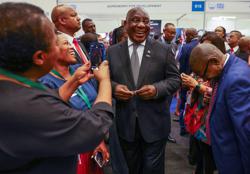 WINDHOEK, Oct. 4 (Xinhua) -- Namibia, home to the only and largest population of free-roaming black rhinos in the world, is aggressively implementing dehorning measures to save the endangered species from being illegally slaughtered for its horns.

Namibia has so far this year lost about 48 rhinos, with poachers reported to be moving away from illegally killing rhinos in well-protected national parks to target private and custodianship farms.

This year alone the country has managed to dehorn about 154 rhinos, a number which the Ministry of Environment, Forestry and Tourism (MEFT) Spokesperson Romeo Muyunda, however, said is just a small fraction as the cost is an issue.

"Dehorning is incredibly costly, due to the effort of finding the animals and the costs associated with the immobilization process," he said. "We continue to do what we can according to the resources we have to protect our wild animals."

"Since January MEFT has immobilized 134 black rhinos, of which 131 were dehorned and we also immobilized 24 white rhinos and dehorned 23 of them," he added.

Namibia was the first country to use dehorning to protect rhinos from being poached in the late 1980s. The measure is said to have contributed significantly to reducing poaching losses to zero around that time.

The move was terminated in 1995 but restarted in 2014 due to rising poaching levels and has been carried out regularly ever since, Muyunda said, adding that horns are removed from rhinos to make them less attractive to poachers.

According to Muyunda, the total number of dehorned rhinos is 932 since 2018. The country has also taken measures to improve security and carry out other anti-poaching initiatives.

Since poachers are targeting private and custodian farms, some of them have started to remove the horns of their entire rhino populations to protect the animals. But despite the measure, the rhinos are still in danger.

According to the Chairperson of non-profit Help Our Rhinos Now (HoRN), Jaco Muller, they have encouraged their members to dehorn the animals to deter poachers.

"All rhinos older than 18 months on our farms have been dehorned," Muller said, adding that after dehorning there is still between 1-1.5 kg of horn left on the animal which still puts them in danger.

"The problem at the moment is that a dead rhino is worth 40 times more than a live rhino. This is why they are being mercilessly slaughtered. Even with strong anti-poaching units, we are still losing the fight," he said.

HoRN is a group of 40 private and custodian game farmers working with the state to protect Namibia's black and white rhinos.

Namibia's Black Rhino Custodianship Program involves relocating rhinos from national parks as free-ranging populations to suitable habitats on farmland and communal conservancies where the landholders are willing and able to undertake the responsibility of providing basic care and security for rhinos. 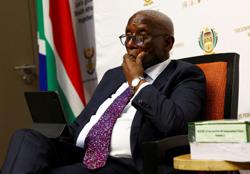