DUBAI (Reuters) - Iranian Supreme Leader Ayatollah Ali Khamenei said on Monday protests over the death of a woman in police custody were planned and not staged by "ordinary Iranians", in his first comments on unrest that has swept the country since Sept. 17.

In comments reported by state media, Khamenei said the death of 22-year-old Mahsa Amini "deeply broke my heart", calling it a "bitter incident".

But he said "some people had caused insecurity in the streets", saying there had been planned "riots".

He expressed strong backing for the security forces, saying they had faced injustice during the protests. 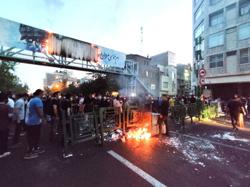