BOGOTA (Reuters) -A delegation from Colombia's National Liberation Army (ELN) traveled to Venezuela for what the leftist rebel group said could be a new phase in peace talks with the Colombian government that will also involve other ELN representatives.

The visit is a next step towards the government's goal of full peace to end a nearly six-decade internal conflict that killed at least 450,000, analysts say. The United States and the European Union consider the rebels a terrorist group.

The talks will include representatives from Cuba, Norway and Venezuela, which have jointly been trying to help them along, sources close to the process said on condition of anonymity.

"Today ... the delegation of dialogues has returned with security and guarantees," the rebel group said in a statement that mentioned the presence of the three nations' representatives, but gave no further details.

The Colombian government could not immediately be reached for comment about the delegation's trip to Venezuela.

The ELN negotiators who have stayed in Cuba for the last four years face arrest warrants for accusations of crimes such as murders, massacres, terrorism and rebellion, while some are wanted in the United States, judicial sources say.

In a statement, the office of the High Commissioner for Peace said the Colombian government of President Gustavo Petro was complying with protocols agreed with the rebels "as a fundamental step to achieve total peace."

The first leftist president of his South American nation, Gustavo Petro had promised to seek peace with the guerrillas and criminal gangs after assuming the presidency on August 7.

He said he was suspending arrest warrants and extradition requests for members of the left-wing guerrilla group in the bid to resume talks.

Previous governments' talks with ELN, which has about 2,400 fighters and is accused of financing kidnapping, extortion, drug trafficking and illegal mining, were stymied by the group's positions, diffuse chain of command and dissent in its ranks.

A peace process between the ELN and the government must bring profound changes for the well-being of all of society, the guerrillas' first commander, Antonio Garcia, told Reuters recently.

The process started in Ecuador during the government of former Colombian President Juan Manuel Santos before being moved to Cuba.

Santos' successor, Ivan Duque, did not pursue it, however, after the group declined demands such as the suspension of hostilities. 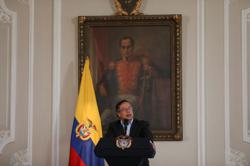 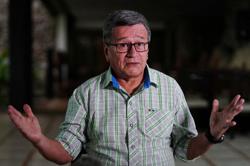