MOGADISHU, Sept. 30 (Xinhua) -- A senior Somali police commander was killed Friday during a security operation against al-Shabab terrorists near Balad town, about 30 km north of Mogadishu, the capital of Somalia.

Sadiq Dudishe, the spokesperson of the Somali Police Force, said Farhan Mohamoud Adan, Banadir regional police commissioner, was leading the operation which was taking place in Basra at the border between Banadir and Middle Shabelle regions.

"Terrorism is a threat to life. We will never be diverted from our objective of ensuring the security of the country and the elimination of terrorism," Dudishe said in a statement issued in Mogadishu.

The police said the operation in Basra began at around 11:30 a.m., local time, and the Somali National Army (SNA) forces faced no resistance from the terror group which is fighting to topple the internationally recognized government.

Witnesses said Adan's convoy ran over an explosive device that had been planted by the extremists along the road to Basra.

Al-Shabaab terror group claimed responsibility for the latest attack despite facing increased offensive from government forces in the recent past. 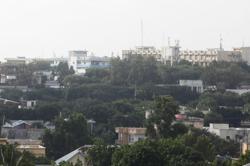