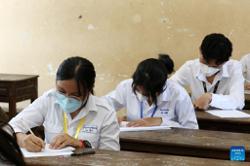 SANAA, Sept. 30 (Xinhua) -- "I have never dreamt that one day I could sit in a classroom and learn how to read and write," said Amaal Ahmed Ghalib, a 60-year-old Yemeni woman from a village near Yemen's capital Sanaa.

The lady, who had never attended a school before, sat with a dozen of women in the classroom, whose ages ranged from the 20s to 60s, and learned the spelling of Arabic alphabets and basic words.

Most of them were still battling with pencils, which seemed more difficult to use than sickles or brooms. But all of them listened intently to their teacher, Intsar Abdulah Sabrrah.

The school was founded and run by Sabrrah, a Yemeni woman in her 40s, with the aim of helping more women learn to read and write to have a better connection with society.

"I found that many mothers desire to learn reading and writing, so they can not only have a better job but also help with their children's education," Sabrrah said.

Sabrrah gave lessons three times a week. Every student, no matter how far they lived from the school, arrived at the classroom at 9 a.m. and sat there with their eyes sparkling with excitement and curiosity.

There are only a handful of literary schools, especially for uneducated women in Yemen, where the illiteracy rate among female adults is very high. The students here took the class as a rare and precious opportunity for them to get educated.

Being an educated woman herself, Sabrrah said while her country is facing problems such as wars, famine, and extreme poverty, educating Yemen's females is also of paramount importance.

"The female population is an integral part of society. They are more than just daughters, sisters, or mothers. If we can get more women educated, knowledge will find its way to millions of families in the country," she said.

She added that it is becoming more and more difficult for girls and women to go to school because of the conservative culture and financial hardship.

"Some of my students' husbands prevent or demoralize them from education by saying they are old, or they should do their duties at home," Sabrrah said, but her students had been very brave for breaking stereotypes and coming here to study.

Yemen has been mired in a civil war since late 2014 when the Iran-backed Houthi militia seized control of several northern cities and forced the Saudi-backed Yemeni government out of the capital Sanaa.

The war has plunged millions of Yemenis into poverty. According to research conducted by the United Nations Office for the Coordination of Humanitarian Affairs (OCHA) in 2021, poverty among Yemeni families has increased by one-third throughout the conflict.

In times of economic crisis, poor families always deprioritize girls' education. Even worse, girls may be considered an additional economic burden, which puts them at risk of child marriage. The OCHA estimated that child marriage increased threefold between 2017 and 2018 in Yemen. More than two-thirds of Yemeni girls marry before the age of 18.

"Women and girls in Yemen have taken an unfair share of the burden in the war," Sabrrah observed, adding that her school aimed to offer a second opportunity for them. 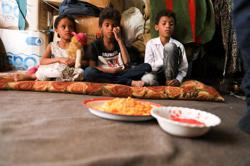 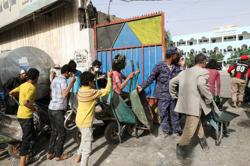