According to preliminary information, increases in retail and wholesale trade, as well as in agriculture, forestry, fishing, and hunting were offset by decreases in manufacturing and oil and gas extraction in August, the national statistical agency said.

Real GDP edged up 0.1 percent in July, after a similar increase in June, driven by growth in goods-producing industries, the agency said.

The agriculture, forestry, fishing and hunting sector rose 3.2 percent in July. Crop production, except cannabis, expanded 7.2 percent, driven mainly by an increase in volumes of other grains and wheat, the agency said.

According to the agency, following record-high exports in 2020, export volumes of wheat dropped at the end of 2021, and lower volumes persisted in the first half of 2022. Amid the expected rebound in wheat production in the new crop year, as well as the conflict in Ukraine and stronger demand for Canadian wheat, export volumes increased strongly in July. 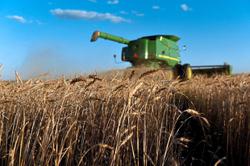