JUBA, Sept. 28 (Xinhua) -- The United Nations Mission in South Sudan (UNMISS) on Wednesday said the inter-communal conflict in South Sudan continues to fuel repeated cycles of violence, warning that it might potentially erode the gains made toward sustaining peace across South Sudan.

Special Representative of the Secretary-General to South Sudan Nicolas Haysom said fighting between rival factions in Upper Nile and parts of Jonglei States has caused massive displacement of civilians to seek refuge in the UN bases in Malakal town, the capital of Upper Nile State.

"The fighting between Sudan People's Liberation Movement/Army-In Opposition (SPLM-IO) forces and the Kitgwang and Agwelek factions has displaced thousands of people within Upper Nile, to Jonglei, Unity states, and parts of Sudan," Haysom told journalists in Juba, the capital of South Sudan.

He said more than 14,000 have been displaced and sought refuge at the Malakal Protection of Civilians site.

Haysom said that the mission is working with State authorities and humanitarian agencies to support sustainable solutions in Malakal to mitigate overcrowding, and outbreaks of disease, as well as maintain peace within the community living within the UN Protection of Civilians site.

In recent days, the Twic/Ngok Dinka conflict has created a new wave of refugees in Abyei, Warrap, and Northern Bahr El Ghazal. 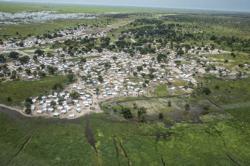