Quebec's incumbent Legault ahead in next week's election polls MONTREAL (Reuters) - Francois Legault, the nationalist leader of Coalition Avenir Quebec (CAQ), is favoured to stay in power with a bigger margin in the Canadian province's election next week, promising to cut middle class taxes and protect the province's official French language.

Legault, 65, a former airline executive, swept CAQ to power for the first time in 2018 through plans to preserve the French language in an English-dominated North America, cut immigration and balance budgets.

He has vowed this year to keep annual immigration capped at 50,000, compared with two rivals who would bring in more newcomers.

A recent analysis showed centre-right CAQ is poised to win a possible 98 seats in a 125 member house, ahead of the Liberals, Conservatives, Parti Quebecois (PQ) and left-leaning Quebec Solidaire, according to election projection site qc125.com.

While Quebecers have cited the economy and inflation as key priorities ahead of the Oct. 3 vote, the election has cast a spotlight on identity politics and the integration of non French-speaking immigrants.

Quebec, which accounts for a fifth of Canada's overall GDP, has struggled with labour shortages due to its restrictive immigration policies, an aging population and comparatively low unemployment. Quebec's unemployment rate is 4.5%, below Canada's 5.4%.

Legault has urged companies facing staff shortages to improve productivity, pointing to automation as one solution.

"It's not true that the only solution is immigration," Legault, also a former PQ cabinet minister, told a leaders' debate on Thursday.

Jack Jedwab, president of the Association for Canadian Studies (ACS), said Quebec voters may be sticking with CAQ given current economic uncertainty.

"This may not be a time for change," he said.

Legault has faced pressure over CAQ's imposition of a curfew and vaccine mandates at the height of the COVID-19 pandemic from Quebec Conservative leader Eric Duhaime, who built up right-leaning support over "freedom of choice."

Surging inflation has prompted CAQ, the Liberals and Conservatives to propose tax cuts. Legault has pledged to hand out one-time payments of C$400 ($297) or C$600 for those earning less than C$100,000.

For details of other proposals and promises: 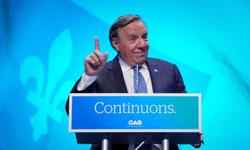