LJUBLJANA, Aug. 18 (Xinhua) -- The Slovenian government announced on Thursday an aid package of 40 million euros (40.33 million U.S. dollars) to help businesses cope with the staggering rise in their energy bills this year and next.

Half of the amount will be available this year and the remaining 20 million euros through mid-March 2023, said Matjaz Han, minister of economy, after a routine session Thursday.

He said this is only the first step in the government's efforts to help the corporate sector.

Two types of aid, capped at 500,000 euros and 2 million euros respectively for each beneficiary, will be available to finance the staggering rise in corporate energy bills, said Han.

This will cover at least 30 percent of the electricity or gas costs, provided that energy prices are at least twice above last year's average. A maximum of 30 percent of total costs can be covered.

A third type of aid is set aside for energy-intensive companies which will be eligible only if they are operating at a loss. In this case, up to 70 percent of their costs will be covered.

Companies that have access to regulated gas and energy prices -- mostly small and medium-sized enterprises -- are not eligible for the scheme, according to the government.

The Chamber of Commerce and Industry (GZS) welcomed the aid scheme, describing it as "an appropriate measure considering the EU legal framework."

But it also noted that the aid will only suffice for the time being and expected additional aid in the autumn.

The aid package "does not address the major unknowns concerning the certainty of gas supplies or the very likely escalation of energy prices for business users next year," GZS said, adding that it needs -- and expects -- "a reliable energy supply at acceptable prices" for the economy to work at its best.

The government decided in July to cap electricity and natural gas prices for citizens and small businesses for a year starting from the start of September, and to reduce value added tax on energy sources for all users to 9.5 percent from 22 percent for the upcoming heating season from early September to the end of May.

The government hopes the decrees will also help reduce inflation which reached 11.7 percent year-on-year in July, the highest in over 20 years mainly on account of higher global energy prices. 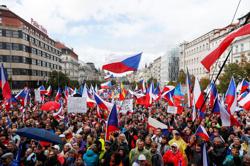