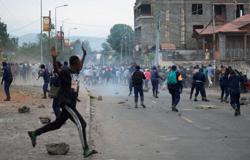 KINSHASA (Reuters) - The United Nations peacekeeping mission in Democratic Republic of Congo has pulled out of one of the largest cities in the country's east after deadly protests against its failure to protect civilians, Congolese and U.N. officials said Thursday.

Butembo, a trading hub of almost a million people, has been one of the epicentres of violent demonstrations since last month that have killed dozens, including civilians, peacekeepers and Congolese police.

The mission's hundreds of troops and civilian personnel in Butembo have left and discussions are planned over how to evacuate their equipment, General Constant Ndima, the military governor of North Kivu province, told reporters.

Ndeye Khady Lo, the spokesperson for the mission, which is known by its French acronym MONUSCO, said the departure was temporary.

"MONUSCO is not leaving Butembo. After consultations with local and national authorities, the mission has proceeded to a temporary redeployment of its personnel outside Butembo," she told Reuters, without saying when they might return.

The protests, which also hit the cities of Goma and Uvira, have laid bare public frustration with the U.N. peaceekepers, who have been deployed to Congo for more than two decades. MONUSCO has around 12,400 troops and costs more than $1 billion per year.

Even after a peace deal in 2003 drew a line under a five-year regional conflict in which millions died, U.N. peacekeepers and Congolese forces have been unable to stamp out persistent violence by dozens of rebel groups in the eastern areas bordering Uganda, Rwanda and Burundi.

Local residents often accuse the peacekeepers of being too passive. The protests that broke out last month were called for by a faction of the ruling party's youth wing.

In a plan drawn up last year, the United Nations laid out a set of minimum conditions that would be necessary for MONUSCO's withdrawal, which it aimed to achieve by the end of 2024.

The conditions include a reduction in the militant threat, the re-establishment of state authority in conflict zones and progess toward disarming and demobilising former rebels.