Spain reduces energy use by 3.7 percent in first week of restrictive measures

MADRID, Aug. 17 (Xinhua) -- Measures introduced by the Spanish government a week ago to save energy have already led to a 3.7 percent fall in the demand for electricity, the country's Minister for Ecological Transition and Demographic Challenge Teresa Ribera said on Wednesday.

The main measures limit air conditioning in workplaces, public buildings, shops, and commercial centers to 27 degrees, and 25 degrees in bars and restaurants. Meanwhile, lights must be turned off on public buildings and in shop windows from 10 p.m.

The measures are aimed at helping Spain reach the European Commission's target of reducing gas consumption by 7 percent between Aug. 1 and March 31 next year.

"Between the first and second week of August, we have seen a fall of 3.7 percent in the demand for electricity in our country (...) which we can attribute to a greater awareness in homes and companies towards the responsible use of energy," said Ribera at an event in Mahon (Menorca).

"The response has been extraordinarily positive," she continued, adding that society must "make an effort to respond in a united manner" to the energy crisis.

Ribera highlighted that the reduction in energy use has taken place in the middle of a heatwave, demonstrating that in Spain, "the tendency is clear in terms of solidarity in behavior and understanding the situation." 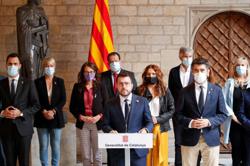