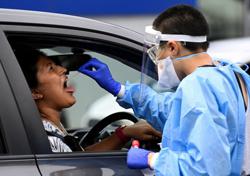 The emergency response was launched in regions including Beijing, Tianjin, Hebei, Shanxi, Inner Mongolia, Liaoning, Heilongjiang, Shaanxi and Gansu, as downpours are expected to hit some of these areas from Wednesday to Friday.

The headquarters urged relevant localities to strengthen their monitoring and early warning processes, and make preparations for flood prevention work.

China has a four-tier flood control emergency response system, with level I being the most severe response.