The Public Finance Supplement of the bank's monthly bulletin, released Tuesday, said debt totaled 2.766 trillion euros (2.812 trillion U.S. dollars), the highest it has ever been in absolute terms. The total is 1.9 percent higher than the 2.714 trillion euros (2.759 trillion dollars) at the start of the year.

A weaker euro has been one of the contributors to the rising debt level, as most of Italy's debt is priced in euros. In late June, when the data in the Bank of Italy report was tabulated, the dollar and euro began trading on roughly equal footing with the dollar briefly surpassing the value of the euro multiple times in July.

Higher prices have been a mixed factor to the growing public debt, the Bank of Italy said.

But inflation combined with other factors such as political uncertainty in the country and worries about the economic impacts of the Ukraine crisis have pushed bond yields to their highest levels since 2014. As of Tuesday, the yield on Italy's benchmark 10-year government bonds was 3.135 percent. That is down from a peak of over 4 percent in mid-June, but up from 1.089 percent at the start of the year.

Higher bond yields, a reflection of investor nerves about a country's economic prospects, increase the government's costs for borrowing money.

Increased public spending is another major factor behind the increase in the country's debt load, as the government took steps to help the country emerge from negative economic impacts of the COVID-19 pandemic.

One factor helping Italy's debt-related situation this year is the return of tourism. According to the Italian JFC Observatory, tourist tax revenue is up nearly 80 percent so far this year compared to the same period 2021, as the sector rebounded from the travel restrictions from the pandemic. 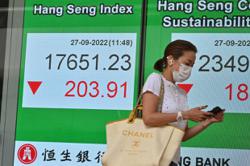