FILE PHOTO: Russian opposition leader Alexei Navalny is seen on a screen via a video link from the IK-2 corrective penal colony in Pokrov during a court hearing to consider an appeal against his prison sentence in Moscow, Russia May 24, 2022. REUTERS/Evgenia Novozhenina

(Reuters) - Jailed Russian opposition politician Alexei Navalny said on Monday that prison authorities had thrown him into a punishment cell for a minor rules infraction after he tried to encourage fellow inmates to form a trade union.

Navalny, President Vladimir Putin's most vocal critic inside Russia, is serving an 11-1/2 year sentence after being found guilty of parole violations and fraud and contempt of court charges. He says all the charges were fabricated as a pretext to jail him in order to thwart his political ambitions.

The 46-year-old, who returned to Russia in 2021 from Germany where he had been treated for what Western laboratory tests showed was an attempt to poison him in Siberia with a Soviet-era nerve agent, was moved in June to a high-security penal colony farther from Moscow. Russia denies trying to kill him.

On Monday, he said on Twitter in a post organised via his lawyers and supporters that he had been put in a punishment cell, initially for three days, for regularly failing to button the top button of his prison uniform which he said was several sizes too small for him.

Navalny is reported to be at the IK-6 penal colony at Melekhovo near Vladimir, about 250 km (155 miles) east of Moscow.

There was no immediate comment from the prison authorities.

"The solitary confinement cell is a 2.5 x 3 metre concrete kennel. Most of the time it's unbearable in there because it's cold and damp. There’s water on the floor. I got the beach version - it's very hot and there's almost no air," Navalny wrote.

"The window is tiny, but the walls are too thick for any air flow - even the cobwebs don't move. There's no ventilation. At night you lie there and feel like a fish on the shore. At 5 a.m. they take away your mattress and pillow ... and raise your bunk. At 9 p.m. the bunk is lowered again and the mattress is returned. There's an iron table, an iron bench, a sink, a hole in the floor and two cameras on the ceiling."

Navalny said he was due a visit in September from his relatives, but that no such visits were allowed for people in solitary confinement.

"So they say that unless I 'reconsider my attitude' it will become my permanent residence," he wrote. 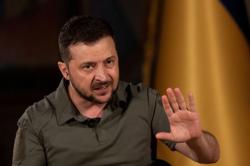 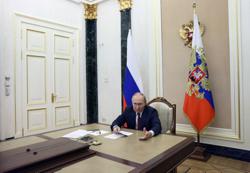