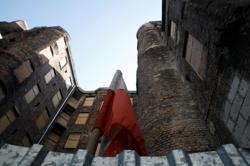 WARSAW, Aug. 14 (Xinhua) -- None of the conducted studies have confirmed the presence of toxic substances which caused the death of tons of fishes in Oder river, Polish Minister of Climate and Environment Anna Moskwa said on Sunday.

Over the last two weeks, thousands of dead fish have been found in the Oder river running between Poland and Germany, with both countries warning of an ecological disaster.

During a joint press conference with Germany's Federal Minister for Environment, Nature, Nuclear Safety and Consumer Protection Steffi Lemke, Moskwa said that despite no toxic substance has been found as of today, but such a scenario was not ruled out.

Moskwa, Lemke and other officials from both countries held meetings Sunday in the Polish city of Szczecin which situated next to the border with Germany to discuss the concerning environmental issue.

The Polish minister also said that by the decision of the Prime Minister Mateusz Morawiecki, a team for the contamination of the Oder had been appointed, meanwhile, crisis management staffs were operating at province level as well.

Morawiecki reiterated on Saturday that the government would "do everything to limit losses and minimize the negative effects of the Oder pollution" and that those responsible would be punished. According to Morawiecki, there could probably be a discharge of harmful substances into the Oder.

The head of Poland's National Water Management Agency and the chief inspector of the country's Environmental Protection Agency have been sacked because of the matter.