PARIS (Reuters) - France said on Monday that all of its troops battling Islamist militants in Mali since 2013 have now left the country, following a decision in February to withdraw over the deterioration of relations between Paris and Bamako.

France and military allies said at the time that after almost a decade based in Mali fighting Islamist insurgents around West Africa, they would move to Niger instead.

"Since this morning ... this redeployment has been effective with the departure from Mali of the last French soldier of Operation Barkhane," the Elysee said in a statement.

"France remains engaged in Sahel, in the Gulf of Guinea and the Lake Chad region with all partners committed to stability and to the fight against terrorism," it said.

Coups in Mali, Chad and Burkina Faso have weakened France's alliances in its former colonies, emboldened jihadists who control large swathes of desert and scrubland, and opened the door to greater Russian influence. 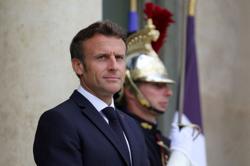